Nunavik looks at ways of keeping offenders out of court

New measures intended to “give youth a chance” 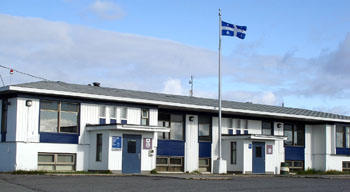 Nunavik wants to rely more on alternative measures to keep young and first-time offenders out of the justice system. This photo shows the Kuujjuaq court house, one of two fully-equipped court houses in the region. (FILE PHOTO)

It’s been a long time coming, but Nunavik has inched closer to implementing alternative justice measures to deal with young and first-time offenders.

The Kativik Regional Government is helping to draft a protocol that will allow Nunavik’s justice committees to decide how the Youth Criminal Justice Act is applied in certain cases.

That would put some offenders’ cases in the hands of their communities to resolve rather than feed them into Quebec’s criminal justice system.

This is already done with some of the region’s adult cases, said Nunavik justice officer Eve-Marie Préfontaine.

“Most of the region’s justice committees have asked to start taking their own young offenders’ cases,” Préfontaine said. “They believe the protocol will bring justice that is more culturally adapted to [young offenders] and they believe it will have more of an impact.”

The move to keep young and first-time offenders out of the justice system comes on the heels of new federal legislation, a sweeping crime bill called the Safe Streets and Communities Act.

If passed, the new omnibus crime bill is expected to hand down stiffer sentences to offenders across the country, such as considering adult sentences for youth convicted of serious violent crimes.

However, the notion of alternative measures is not new to Nunavik.

In the spring of 1993 Judge Jean-Luc Dutil conducted the first sentencing circle in Nunavik, in Kangiqsujuaq, where a local committee helped determine the sentencing of a man convicted of an assault.

Both these reports underlined the need to introduce new sentencing procedures and suggested alternative methods would be more effective in reducing crime because they would strengthen communities.

Makivik Corp. then started a community justice program in 2000, which led to the creation of justice committees across the region.

Under the Youth Criminal Justice Act, cases can be given to the director of youth protection, who can then hand some cases over to Nunavik’s local justice committees.

Composed of three to eight members, these committees administer justice using culturally-adapted approaches such as mediation and counselling by elders and offer support to the offender, victims and their families.

Already in Nunavik, six local justice committees have signed on to receive adult offender cases, and two more communities will soon join them.

That means that when a case is handed over to a justice committee, its members will determine an appropriate sentence – generally to be served in the community.

Préfontaine couldn’t say what percentage of adult criminal offences are actually directed to those committees, only that it’s not many.

“The criteria are strict,” she said. “[Justice committees] cannot hear severe crimes and domestic violence cases cannot be deferred to them.”

But the criteria are generally less strict for youth offences, she said.

The use of alternative measures could be at the discretion of police officers in the case of a youth’s first offence, she added.

“We all know that judicial system seems to take a long time -— some cases can sit in court for two years,” she said at the recent KRG council meeting. “With this, youth can be dealt with right away. And what the youth has to do to repay is decided by the community.”

Once a protocol is adopted, Mackinnon said police officers will get the training they need to apply the measures.

“We see more and more youth going into crime, so we want to prevent it before the numbers go higher,” said Gordon, who works for Makivik. “It’s also to teach people about Inuit ways.”

The new measures for youth justice fall into a recent review of Nunavik’s judicial system, known as the “social regulation project.”

Its working group on justice in Nunavik, formed in 2008, said the region’s justice system “faces a deteriorating situation of inefficiency.”

This group’s members called for the construction of permanent court houses outside the two communities which have court houses — Puvirnituq and Kuujjuaq — and holding cells, and the creation of a permanent judge position in Nunavik.

They also called for more emphasis on the social problems that often lead to criminal behaviour, by setting up specialized courts for conjugal violence and “sobering-up centres.”