Nunavik mining conference to focus on growth of Inuit business

“Nunavik is open for business, but under our terms” 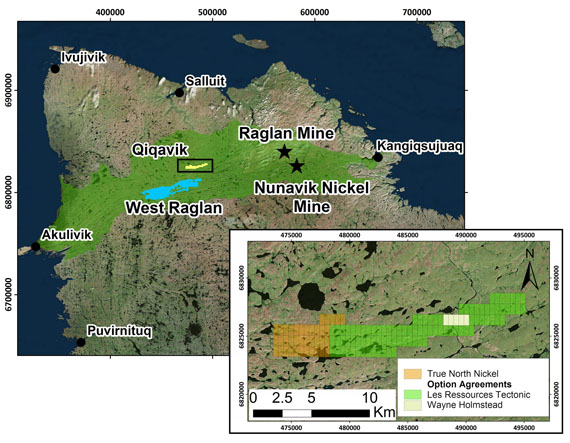 This map shows True North Nickel’s two Nunavik properties, Qiqavik and West Raglan, where the company plans to do exploration this summer. A representative from the company will speak to the Kuujjuaq Mining Workshop April 26. (IMAGE COURTESY OF TNN)

Nunavik wants to be in a better position to welcome responsible mineral development to the region.

That’s the message that the region’s Inuit birthright organization, Makivik Corp., will deliver to the 2016 Kuujjuaq Mining Workshop, which runs April 26 to April 28.

Andy Moorhouse, Makivk’s new vice president of economic development, will open this year’s conference with an overview of how Makivik plans to benefit directly, and indirectly, from mining.

“Nunavik is open for business, but under our terms,” said Moorhouse, who is scheduled speak April 26 at the opening of the conference. “This is the core message.”

However, in his new role, Moorhouse wants to help Nunavik businesses launch and develop within the region’s mining industry.

A recent survey, prepared by Makivik, found that Nunavimmiut don’t necessarily see the potential for jobs and business within mining, apart from the jobs that many Nunavimmiut tend to fill as housekeepers or kitchen staff at Nunavik’s two operating mines.

Why not develop more Nunavik-based services? Moorhouse asks, using catering as an example.

“At any point in time, there are 500 to 800 people working at the mine, and they need to eat,” he said. “So there’s that possibility of getting that contract to provide meals.”

But Moorhouse plans to restructure his department by hiring new positions dedicated to economic development within the mining industry, to support community-based business in the region.

Although the sector has been slow in recent years, the lull offers a chance for Makivik to put some projects and programs in place.

“It’s an opportunity for us to get ourselves organized and structured to maximize our mining options for the future,” Moorhouse said.

“The market eventually has to come up again. “

This is the fifth year of the Kuujjuaq Mining Workshop, delivered by the Nunavik Mineral Exploration Fund (NMEF.)

The annual conference draws exploration companies, resource development officials from both levels of government, Inuit organizations and other Nunavik organizations.

“I think people are expecting it more and more every year,” said Cynthia Brind’Amour-Côté, the NMEF’s technical director. “We see more interest among presenters.”

In addition to Makivik, Glencore’s Raglan Mine and Canadian Royalties’ Nunavik Nickel — the two operating mines in Nunavik — are also speaking to the conference.

The conference will hear from Géologie Québec, a department under the province’s ministry of natural resources, the Société du Plan Nord, along with researchers looking at the impacts of mining on the region.

But Brind’Amour-Côté echoed Moorhouse’s observations, noting the conference has become more business-focused, with a greater emphasis on how local businesses can play a role.

“With the mining sector so slow, it’s a good time to develop those projects,” she said.

Nunavik has seem a major slump in mining since the region’s boom in 2011 — like other jurisdictions in the North.

Brind’Amour-Côté expects three companies to carry out exploration work in Nunavik this summer:

• True North Nickel, which in 2015 found high grade gold samples on its Qiqavik and West Raglan properties, located between Akulivik and Salluit, and plans to do more exploration in 2016. In a March 2016 release, the company called Nunavik’s nickel belt “one of the best mining jurisdictions in the world;”

• Midland Exploration’s Willbob property, 66 m southwest of Kuujjuaq, is exploring gold and platinum group elements deposits, with some of that work undertaken by the NMEF.