“I just want something good to come from the horrible, painful thing” 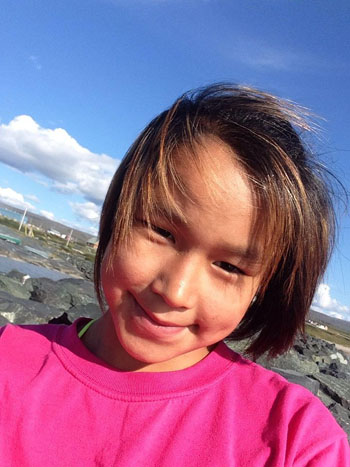 Alacie Inukpuk would have turned 12 years old last week. The girl’s body was found outside her hometown of Umiujaq Oct. 28 but the cause of her death remains unclear. (PHOTO COURTESY OF J. SAPPA)

It was a ceremony that made the girl’s mother feel proud of who her daughter was and feel supported by her community. But it didn’t bring her any peace.

Jeannie Sappa wants answers about Alacie’s death. Quebec’s Sûreté du Québec are still investigating the death though police have yet to find evidence of criminal wrongdoing.

Alacie went missing some time on Oct. 23 or Oct. 24, but the girl wasn’t reported missing until a few days later.

On Oct. 28, a woman walking her dog north of the Hudson Bay community discovered Alacie’s body.

Sappa is grief-stricken and has trouble understanding how her daughter got there.

She said Alacie died of hypothermia, but the girl had also been drinking alcohol.

“From rumours I hear, people saw her drunk in the community,” Sappa said. “Why didn’t anyone call the police? She was just a child.”

Sappa said she is also concerned that someone may have given Alacie alcohol. She wasn’t aware of her daughter ever drinking before, in the village of about 450, where alcohol is restricted and only available to order from the South.

Alacie also had expressed a strong dislike of alcohol, Sappa said, because of the addictions issues that impacted her extended family—something that makes her death even more shocking and hurtful.

“I know alcohol shouldn’t be accessible to children,” she said. “How could this happen?”

A resident of Umiujaq who knew Alacie, and asked not to be named, said it is unusual for youth she knows of that age to drink alcohol. She believes a friend a few years older than Alacie provided the alcohol she drank before she died.

But the woman said Alacie struggled with an unstable home life—due in part to her parents’ illnesses—and missed a lot of school.

“She went through difficult times at a young age,” the woman said. “It was hard for her.”

On Oct. 23, Alacie kissed her mother goodbye before she headed to the local youth centre. Teachers at Kilutaaq school, where Alacie was a Grade 5 student, were doing professional development that day, so there were no classes.

Sappa, who is being treated for cancer, was set to leave that same day for Montreal to undergo chemotherapy.

But the flight ended up being cancelled so Sappa returned home. At about 9:30 p.m. that night, she asked her other daughter to look for Alacie, who was meant to be staying with her father while Sappa was away.

She heard from the other daughter that Alacie was staying at another relative’s home that night.

Sappa left for Montreal on the 24th. But the following day, when she still hadn’t heard from her daughter, Sappa said she started thinking the worst.

She called the police in Umiujaq to report Alacie missing. Sappa started calling people in the community to ask if they’d seen her, then called the FM radio station in Umiujaq to make a more public call to locate Alacie.

Some people later told Sappa they’d seen Alacie days earlier drinking in the community with a friend. Someone said they saw the girl sleeping under a house.

Police are encouraging people in the community to share any information they might have on Alacie’s whereabouts Oct. 23 or Oct. 24.

Sappa wants her daughter’s death to serve as a severe reminder about the dangers of alcohol use and addiction.

“I want our leaders—mayors, schools, police, social services, parents, youth, everyone—coming together to start really talking about this,” she said.

“We’re passing this form of addiction onto our younger generation. It needs to stop. We are suffering and it’s our children who are paying the price.”

Alacie had lived with Sappa for all but three years of her life, when she had returned to live with her biological mother, Sappa’s sister.

Alacie was living with Sappa up until her disappearance, though she often stayed with her biological father while Sappa was in Montreal for chemotherapy treatments.

Alacie would have turned 12 last week.

“Alacie was very intelligent and caring. She stood up against bullying; she stood up for her siblings,” Sappa said.

“She always greeted people with a smile and she always was the first to start conversation.”

Alacie loved spending time outdoors, picking berries. She wanted to be a nurse, her mom said.

Now, Sappa said she’s forced to make other plans, ones she hopes will honour her daughter’s life and ensure other Nunavimmiut children stay safe and healthy.

“I just want something good to come from the horrible, painful thing,” she said. “I don’t want this to be forgotten.”