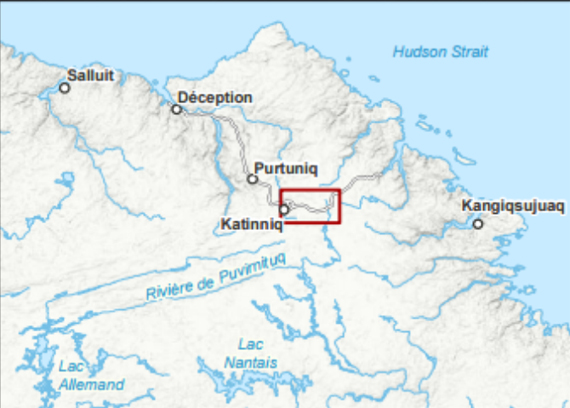 The red area shows where Glencore hopes to expand by digging five new underground mines, which could extend the mine’s life until 2039. (IMAGE COURTESY OF GLENCORE)

The operators of Nunavik’s Raglan nickel mine hope to expand its lifespan well beyond 2020, with the addition of five new underground mines across the region’s nickel belt.

Glencore, the corporation that operates Raglan and its four current underground mines, has submitted the project to the Kativik Environmental Quality Commission, which reviews the social and environmental impact of development in the region.

With current operations scheduled to wind down by 2020, Glencore completed a scoping study last year, the company said, which confirmed viable nickel deposits on the eastern half of the Raglan property.

The first phase of the expansion would include two underground mines, called Mine 14 and Donaldson mine, which would operate from 2019 to 2032.

The exploitation of three new underground mines, Mine 8, Boundary and West Boundary, could extend production from 2024 to 2041, Glencore said in a preliminary information document submitted to the KEQC in 2014.

The total annual production for the duration of those two phases will remains the same as at present, Glencore said, at 1.32 million metric tonnes.

The Phase II and III mines would operate with much of the same infrastructure already in place on Raglan’s property, including the Katinniq complex, which houses accommodation for workers, the mine’s concentrator and sewage system, along with the 150-kilometre road network, which connects that site to the Donaldson airstrip and the mine’s port at Deception Bay.

The new development would require an expansion of the existing tailings site, construction of some new access roads, and an electric supply connected to the new sites by a 25-Kilovolt cable, Glencore said.

But the company must first prepare and present an environmental and social impact assessment to the commission, expected to be complete by November 2015, before the project undergoes a public review.

Construction on the new phases could start as soon as June 2017.

Glencore is touting the expansion as a major benefit for the region. Statistics from June 2015 show that Inuit employed at the mine and through local contractors make up 20 per cent of Raglan’s total workforce.

Raglan, which first went into operation in 1997, operates four mines — Katinniq, Mine 2, Kikialik and Qakimariurq — on a property 60 kilometres west of Kangiqsujuaq and about 115 southwest of Salluit.