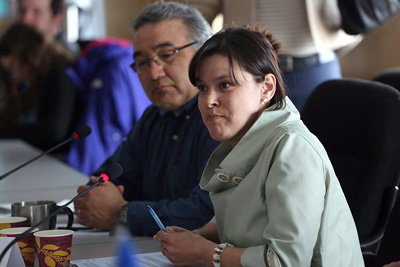 Kativik Regional Government chair Jennifer Munick and Makivik Corp. president Jobie Tukkiapik, left, at a Senate committee meeting in Kuujjuaq this past April. Nunavik’s regional leaders are reassuring Nunavimmiut that they’re working in tandem to address the issue of suicide in the region. (PHOTO COURTESY OF MAKIVIK CORP)

Nunavik’s regional organizations say they’ve together drafted a Nunavik Crisis Response Plan to address the high number of suicides the region has suffered so far in 2016.

Leaders of Nunavik’s regional organizations, including Makivik Corp., the Kativik Regional Government, Kativik School Board and the Nunavik Regional Board of Health and Social Services, met in Kuujjuaq earlier this week under the umbrella of Parnasimautik.

That’s the region’s blueprint for future development, from social programming to economic activity.

In a May 26 release titled “A message to Nunavimmiut,” Nunavik’s organizations acknowledged a “worrying increase in deaths by suicide and suicide attempts, particularly among our youth.”

“This situation is of great concern and all organizations are working in unity to find solutions,” said the release, prepared by Makivik.

“Rest assured that the local and regional authorities meet regularly to discuss, share and put in place different measures.”

Nunavik’s leadership didn’t share many details about the crisis response plan, except to say that it’s being coordinated by the health board.

The release said the region has received initial financial support from both the provincial and federal governments.

But Nunavik organizations also said in the statement that “because it will take a long time to reverse the current situation, the governments must provide adequate funding for services and facilities in the long term.”

Among its priorities, Parnasimautik has identified improvements to the region’s housing, health services, justice system and early childhood education as major priorities.

“Solutions must be targeted at the societal and individual levels and grounded in our strengths — identity, spirituality and resiliency adapted to the realities of today and the challenges facing our youth, families and communities.”

There have been calls from some Nunavimmiut in recent weeks to declare a state of emergency, in order to draw more funding and political will to support the region.

But Quebec’s health and social services department said it’s been attentive to the region’s needs, while Nunavik’s own health authorities have opted for a made-at-home approach.

In more recent months, the health board has hired additional front-line workers, including social workers, psychologists and counsellors.

In the May 26 message to Nunavimmiut, the region’s leaders offered their “sincere condolences to individuals and families who have been touched by these sad events.”

Help is available through the following organizations:

• Traditional Health Support workers, in Inuktitut and English, from Monday to Friday by calling 1-877-686-2845