“We really need to delve in and do more” 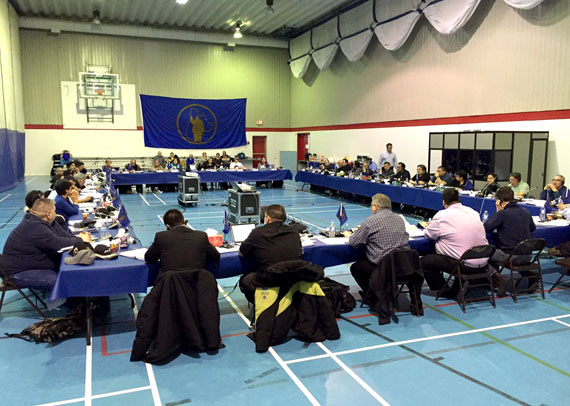 Makivik Corp. delegates and representatives from Nunavik’s regional organizations met as part of the Inuit birthright’s annual general meeting in Kuujjuaraapik earlier this month, where groups committed to work together on a regional suicide prevention strategy. (PHOTO COURTESY OF MAKIVIK)

Nunavik leaders hope to draw from the work of Canada’s national Inuit organization in developing their own regional suicide prevention strategy.

Regional leaders meeting earlier this month at the annual general meeting of Makivik Corp., committed to work together on a plan to address Nunavik’s high rate of suicide, particularly among its youth.

“We need to identify the issues — why suicide is so high, who are the people who are committing suicide and why?” said Makivik president Jobie Tukkiapik.

“There are a whole bunch of extenuating circumstances or social situations out there….and we need to be the fallback or support system for these people.”

“We really need to delve in and do more.”

Nunavik leaders are responding specifically to a series of deaths in its largest community. Since late December, five local youth between 15 and 22 years of age have died by suicide. Another suicide in Montreal has been linked to the community.

Between 2000 and 2011, 163 Nunavimmiut died by suicide, making it the second-highest cause of death in the region, just after cancer.

Earlier this month, Inuit Tapiriit Kanatami announced plans to develop its own strategy by July, under ITK President Natan Obed, who spoke at the Makivik meeting in Kuujjuaraapik March 16.

In the meantime, Kuujjuaq Mayor Tunu Napartuk has said front-line workers in the community are exhausted and need back up to support at-risk youth and their families.

Quebec’s department of health and social services said it has been in regular contact with regional health authorities since December, and has offered help in recruiting professional resources like psychologists, social workers and addictions counsellors.

But the Nunavik Regional Board of Health and Social Services has not yet said if any additional health and social service staff have been brought into the community in 2016.

The Kativik School Board said it has offered additional counselling to students at Jaanimmarik high school in Kuujjuaq on an ongoing basis since December. More recently, the board hired a youth specialist to work with the school’s counsellors.

When one of the victims had family connections to Kangirsuk, the school board also hired an additional counsellor to work at Sautuit school in that community on a temporary basis.

“Our students’ counselling and support needs remain at a very high level throughout Nunavik,” the KSB said in a statement provided to Nunatsiaq News.

“The past months have been exhausting for our teachers, school administrators and education professionals. Along with our students, they have been experiencing a tremendous amount of stress since the beginning of January.”

Nunavimmiut can speak to a health care professional by calling their local CLSC health clinic at -9090.

For residents of Nunavik and Nunavut, support is available in both English and Inuktitut, 24 hours a day, by calling the Kamatsiaqtut help line at 1-800-265-3333.

You can call the National Suicide Prevention Lifeline anywhere in Canada at 1-800-273-TALK (8255) for English-language support.