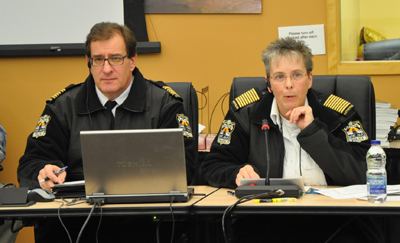 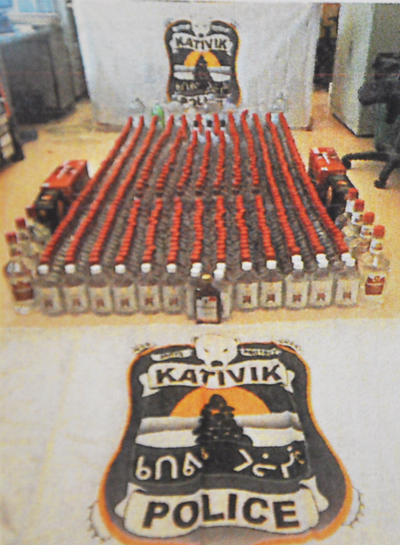 KUUJJUAQ — Nunavik police say the Hudson Bay community of Puvirnituq has become a central distribution point for bootlegged alcohol destined for other communities in the region.

That was made clear this past summer, when Kativik Regional Police Force officers seized more than $70,000 worth of hard liquor coming through the community of about 1,700 people.

Police say the alcohol was bound for Salluit, Akulivik and Ivujivik, further north.

“It’s a bit scary, because if we got all that, how much did we miss?” said KRPF chief Aileen MacKinnon in a presentation to a meeting of the Kativik Regional Government council Nov. 26.

Another trend Nunavik police say they’re seeing is the use of mules to transport drugs — that’s when dealers get people to carry illegal drugs, often on their body, rather than sending them through mail or cargo.

But according to the law, being a drug mule is still considered trafficking, MacKinnon said.

“Some Nunavimmiut have been charged and convicted of trafficking by transporting drugs or allowing someone to use their name or PO box in exchange for drugs or money,” she said.

The KRPF’s investigation unit is still working alongside Canada Post to monitor drug traffic into Nunavik, but MacKinnon noted the amounts of narcotics coming into the region that way is decreasing.

All the same, police seized more than 1,500 grams of marijuana in Kangiqsualujjuaq between August and October, with a total northern street value of about $75,000.

The KRPF seized about 850 grams of marijuana in Salluit over that same period. Marijuana sells for about $50 a gram in Nunavik.

And in Kangirsuk, police seized 400 vials of hash oil over the last few months, valued at about $50,000.

“When you look at the price of what they pay and then what they get up North, it’s just tremendous,” MacKinnon said.

The KRPF’s statistics show that violent crime is up across the region so far this year, by about 17 per cent from the same period last year. For sexual assaults, the increase is 14 per cent from 2013.

Crime in general is up across the region so far in 2014; the overall number of police interventions between January and October sits at 16,296, up slightly from 15,904 during the same period in 2013.

But those numbers are down from the same period a year earlier, in 2012, MacKinnon pointed out, where the KRPF counted well over 18,000 police interventions.

In spite of an exodus of many KRPF officers following the shooting death of Cst. Steve Déry last year, MacKinnon said she has seen stability return to the force in the number of officers staying in the region long-term — considered three years or more.

“Compared to the years 2008-2009 where we had approximately 30 per cent long-term employees, now 43 per cent of our officers have been with us for at least three years,” she told KRG councillors.

But at least one important job is about to become vacant. MacKinnon, a long-time KRPF member and chief since 2008, leaves the organization in January 2015.

The KRG is in the process of hiring a new chief to replace her.

MacKinnon, who first came to Nunavik to work as a teacher, started with the KRPF in the late 1990s, working as an officer in communities such as Kangiqsujuaq and Puvirnituq.

KRG councillors thanked MacKinnon for her years of work with the force.

“My years with the KRPF were amazing — not always easy, but I would never give this up for anything,” MacKinnon said.

“It’s been an amazing experience that will always be with me. I feel very lucky and privileged that I got to experience all of that.”