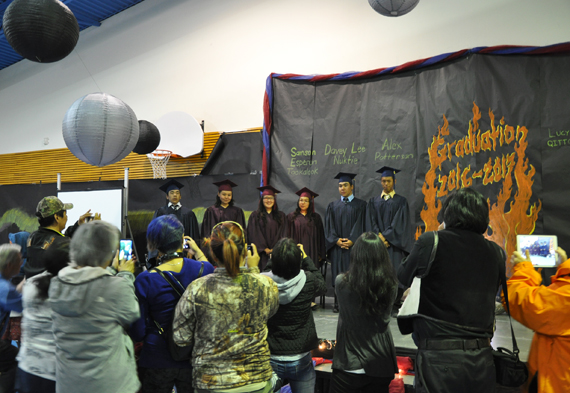 Kativik Ilisarniliriniq officials say a new Quebec ombudsman report on gaps in Nunavik’s education system is timely. The report highlights issues like low school attendance and graduation rates, the prominence of English and French in an Inuktitut-speaking region and limited access to post-secondary education. Here, a group of students graduate from school in Umiujaq in 2017. (FILE PHOTO)

Nunavik school board officials say they’ve already made some progress on the issues raised in a new report flagging gaps in the region’s education system.

But Kativik Ilisarniliriniq says the Quebec ombudsman’s report issues a timely warning to a new provincial government to keep that momentum going.

The special report released earlier this week calls on Quebec’s Ministry of Education and Higher Learning to provide better support to Nunavik’s school board.

Challenges identified by the report include low school attendance and graduation rates, the prominence of English and French in an Inuktitut-speaking region and limited access to post-secondary education.

As remedies, Quebec’s ombudsman recommends better communication between the region and Quebec City and an action plan to tackle the region’s housing shortage, school attendance, and the recruitment and training of teachers.

“A lot of these recommendations brought forward in the report are issues we’re already working on. We’re just hoping that this new government is going to follow through.”

“We’re very eager to sit down and talk with him,” Watt said.

Over the last year, Quebec’s Education Ministry has already made strides to better understand the region’s education system, through the creation of a new roundtable on education and a departmental visit and tour of the region’s schools this past August, Watt said.

Both the roundtable and the ombudsman’s investigation were prompted by an issue that came to light in 2017, when parents found out that high school graduates in Nunavik hadn’t been receiving secondary diplomas for a number of years.

That prompted a wider discussion about the quality of education in the region, which resulted in many Nunavimmiut reaching out to the ombudsman’s office.

“I know that there were some complaints [sent to the ombudsman],” Watt said. “This was all happening around the same time as our attestation issue … when Makivik was questioning if our education system was on par [with the rest of the province].”

The ombudsman’s office notified the school board at the beginning of the year that it was launching an investigation into complaints it had received about education services in the region.

“We were taken aback, but at the same time, we welcome this,” Watt said in a phone interview from Umiujaq, where KI commissioners were meeting last week.

He said it highlights the need to lobby the government on issues that are common to all of the region’s organizations, like its housing shortage.

School attendance and absenteeism has long been a challenge for school administrators in Nunavik, he said, but it’s something KI has started to collect data on.

To that end, half of the region’s schools have implemented new software called Dash this year to help track student attendance.

And Watt confirmed that transportation to and from Nunavik’s schools is indeed an ongoing challenge, as flagged in the report.

“One of the things that keeps coming up at our council of commissioners meetings are the school buses,” he said. “Most of our communities don’t have heated garages.”

KI has also had preliminary discussions about introducing a bilingual Inuktitut-English education model from elementary through secondary grades.

But the school board acknowledges the challenges that already exist recruiting teachers and the low number of Inuit teachers with teaching training to fill those roles.

Quebec’s ombudsman plans to follow up with the province’s Ministry of Education next February, at which point the department is expected to have an action plan in place to respond to the recommendations.