“The program will relate to them as a people” 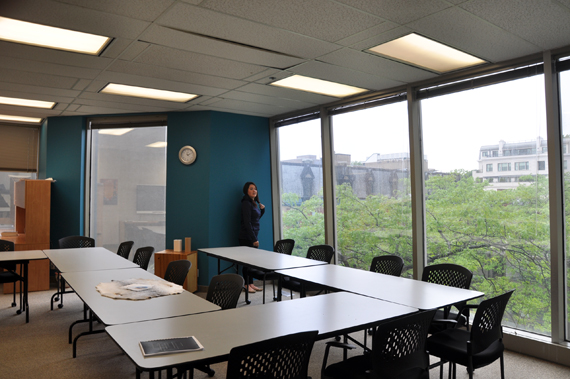 Nunavik Sivunitsavut will open its doors this August in the Montreal-based Avataq Cultural Institute, in a space overlooking the city’s Saint-Catherine Street West. (PHOTO BY SARAH ROGERS) 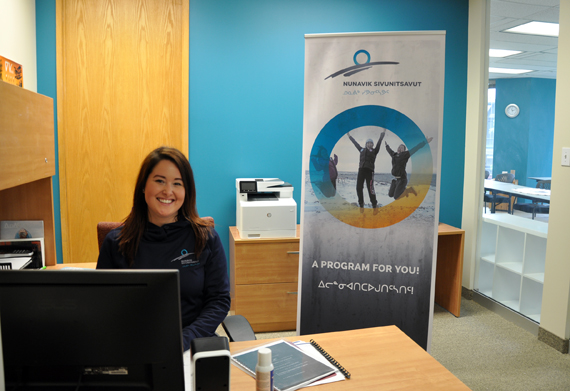 Connie Qaunaq-Burke sits behind the desk at the Nunavik Sivunitsavut office space in Montreal, where she works as an administrative assistant. Qaunaq-Burke, originally from Arctic Bay, graduated from the Ottawa-based Nunavut Sivuniksavut in 2009. (PHOTO BY SARAH ROGERS)

MONTREAL—Paasa Lemire is looking forward to learning more about who she is and where she comes from.

The Kuujjuaq-based court worker has been accepted to the new Nunavik Sivunitsavut program, which launches in Montreal this August.

“When I was in high school, we only had one 45-minutes Inuktitut class,” said the Jaanimmarik high school graduate, who now works as a reintegration officer at the Kuujjuaq courthouse.

“I want to develop my language and learn more about myself as an Inuk.”

After Lemire graduated in 2015, she studied at John Abbott College on Montreal’s West Island for a year. But as a 17-year-old, she found it difficult to live away from home, and returned home to Kuujjuaq the following year.

Now, at 19, Lemire said she feels better prepared to move away. And she won’t be doing it on her own; Lemire’s boyfriend, Alex Saunders, is also enrolled in the program next year. The couple will share an apartment together in Montreal’s Old Port neighbourhood.

“I’m really excited,” Lemire said. “Having the opportunity to be one of the first to try this program is amazing.”

The Kativik School Board’s new made-in-Nunavik college program will welcome a class of 18 students in its inaugural year.

The Kativik School Board first announced plans in 2010 to open a Nunavik version of the program with the goal of offering Nunavik students a chance to learn their history and gain cultural knowledge in an accredited urban setting.

The first students will arrive in Montreal Aug. 14 for a week of orientation, said Lisa Koperqualuk, the program’s outgoing director.

“Some of the students are younger; some of them have young children,” she said. “So we’ll bring them through what’s required of living here. And it’s really a time for them to get to know each other.”

The program, inspired by the Ottawa-based Nunavut Sivuniksavut for Nunavut Inuit, received applications from 27 students in seven Nunavik communities as well as from Montreal.

To apply, students had to be Secondary 5 graduates and beneficiaries of the James Bay and Northern Quebec Agreement.

Nunavik Sivunitsavut’s first group of students will range in age from 17 to 38. There were only two men who applied, Koperqualuk said, and only one who planned to enroll in 2017.

“This is work for the future,” Koperqualuk said. “We need to encourage our young men to continue in their studies.”

Five NS students are new graduates; others will take leave from their full-time jobs in Nunavik.

Nunavik Sivunitsavut is an English-language program although students will take Inuktitut-language classes. (Based on demand, the KSB could opt to create a French-language version in years to come.)

But Koperqualuk said the program will remain Inuit-focused and will provide an overview of circumpolar history, culture and contemporary issues.

“A lot of students when they come south, they find there’s a gap in the education system,” she said. “There’s no talk of what they grew up with in Nunavik.”

The history program explores the Inuit odyssey, from pre-contact to important points in recent history like commercial whaling in the Arctic and the co-operative moment.

“The program will relate to them as a people,” Koperqualuk said. “Hopefully they can find something they can be passionate about.”

One of the major goals of the program is to build pride and confidence among Inuit youth.

Koperqualuk said Nunavik Sivunitsavut, like the Nunavut version of the program, will prepare students to perform Inuit drum dance, throat singing and other performance art so they can also serve as Inuit ambassadors for events in the Montreal area.

The school board now plans to hire six teachers and an NS student animator in time for August.

Koperqualuk, aware of the low rates of post-secondary success in Nunavik, said she believes the NS model could change that.

“I’d like to see a 100-per-cent retention rate here but it’s the support mechanisms around them that will help,” she said.

“It’s the first year—we don’t know how it will all be absorbed,” she added. “But we’re hoping the students will find it relevant.”

NS is still a pilot project for now. Its continuation will depend on demand and funding. The program is currently funded for the year through a $660,000 federal grant, plus additional support from the Kativik Regional Government and Makivik Corp.

But the Kativik School Board hopes to apply for funding to cover an additional three-year period following its inaugural year.