Nunavik to launch stay-in-school project for 2014

“What can your organization offer?” 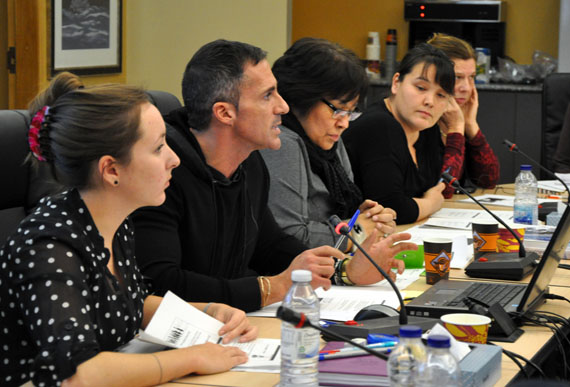 From left, Olivia Ikey Duncan, Elias Moukannas, Mary Aitchison, Julie-Ann Berthe and Solange Loiselle introduce the Esuma school perseverance project to the KRG council Nov. 26, a project that will launch across Nunavik in the new year. (PHOTO BY SARAH ROGERS)

KUUJJUAQ — Nunavik has a bold plan to keep its youth in school — but this will require the help of everyone in the region.

Recognizing school drop-out rates as a social problem, rather than an educational problem, the Kativik Regional Government has brought public and private organizations together as part of regional stay-in-school project.

Esuma — roughly translated as “thinking” in Inuktitut — includes natural partners like the Kativik School Board and Makivik Corp., but also the regional broadcaster Taqramiut Nipingat Inc., the Fédération des coopératives du Nouveau-Québec and the two major mining companies that operate in the region, to name a few others.

“You might wonder why some of these organizations are involved in school success, but put that child in the middle of all of these and see the impact these groups have on the community,” project coordinator Elias Moukannas told the KRG council Nov. 26.

“Everyone is working for that student,” he said. “What can your organization offer?”

The goal is to spark an interest in education in a region where about 80 per cent of students leave school before they graduate, a drop-out rate that is easily among the highest in the country.

But Moukannas says Esuma’s focus is not on improving graduation rates.

“Whenever we talk about success rate among our students, the first thing they see is this big mountain that no one is able to climb,” he said. “We want the focus to be on working hard and achieving goals.

“And if we all focus on a good quality education, maybe they’ll want to stay in the region.”

It’s a lofty goal, but Esuma is modelled on a successful project that started in Quebec’s Saguenay region in the mid-1990s.

A regional council made up of different partners there began delivering extracurricular activities, awareness campaigns, intervention and support for at-risk youth and research to track those efforts.

That project has since had a significant impact on local school attendance rates and grown into a Quebec-wide movement.

In Nunavik, Esuma will officially launch in January, at which point there will be a call for projects.

Asked what kind of projects he envisions for Nunavik, Moukannas said that will be for communities and organizations to decide.

But he gives one example of a contribution that even one person could provide: reading to children as part of an after-school or evening program.

“The idea is to create the movement,” he said.

The introduction of Esuma seemed to respond to concerns expressed this week by KRG regional councillors about the low numbers of Inuit employed at Nunavik organizations and a lack of training opportunities.

“I know there’s a lot of development coming up in my community,” said Aupaluk councillor David Angutinguak, referring to the iron mine project at his community’s door. “And I want to plan ahead of time, because I know there will be employment opportunities.”

KRG chairperson Maggie Emudluk encouraged councillors to take the project home to their communities and help drum up support for new actions.

“There are many Inuit teachers who have certificates, degrees and even Masters [degrees], and we should be proud of who we are,” Emudluk said. “But the numbers are telling us what needs to be done.”