Nunavik to Quebec: deliver better justice to our communities

“The system has to respect our values” 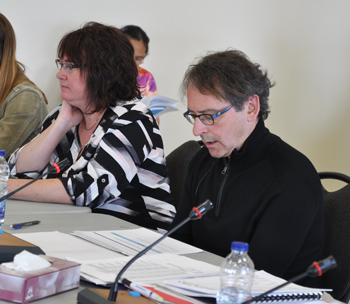 INUKJUAK — Quebec’s travelling court and its justice system are failing Nunavimmiut and something needs to change, the Kativik Regional Government says.

During regional council meetings in Inukjuak May 27, the KRG’s council passed a resolution urging Quebec to take action to improve the administration of justice in the region and better adapt it to northern realities.

“Nunavimmiut have the right to enjoy the same protection of, and support from, and accessibility to justice services despite the geographical and other constraints of Nunavik,” the resolution read.

Many of Nunavik’s concerns focus on Quebec’s travelling court system, designed to bring the court into Nunavik’s communities several times a year.

But that system is rife with problems: from delays, postponements and communication issues to a lack of appropriate facilities to host court proceedings.

“Forty years after the JBNQA, Quebec is actually not following the agreement concerning the court system,” she told the regional council meeting May 27.

“The system has to respect our values. And we want to be part of the process.”

The regional government is not alone in its concerns.

Earlier this year, a report prepared by Quebec’s bar association called on Quebec to fix its northern justice system to fit the cultural and administrative realities of the region.

Even 25 years ago, when Makivik Corp. mandated the Inuit Justice Task Force to visit the region’s communities to look at how the justice system was serving Nunavimmiut, it findings were similar.

And in recent years, Nunavimmiut told Parnasimautik consultations throughout the region that they feel poorly-served by the courts, Emudluk said.

“As Inuit, when we go to court, because it’s not in our culture, we have absolutely no idea what is happening,” Emudluk said. “We need to be educated and informed, because those who take a long time to go through court — even if they want to leave that part of their life behind — it’s very difficult to fix themselves.”

KRG councillors directed many of their concerns to two Quebec bureaucrats attending the meeting in Inukjuak May 27.

Jacques Prégent, who works in the office of Aboriginal Affairs at Quebec’s justice department, noted that the number of criminal files opened in the region has risen significantly, from about 2,100 in 2009 to 3,400 in 2014.

And that’s motivated the court to visit the region more often, he said.

While the court used to spend about 170 days a year in Nunavik, that’s now grown to about 229 days.

That could help the court process more cases in the region, although the travelling court still has to contend with the weather, Prégent said.

When a court visit is cancelled due to bad weather, Prégent acknowledged that it’s almost impossible for the court to return to a community immediately afterwards, since the travelling court docket is planned well in advance and books visits five days a week.

And the travelling court remains unable to visit three Nunavik communities — Akulivik, Umiujaq and Ivujivik — Prégent said, because there are no facilities to host proceedings.

“It’s the reality of our system,” he said.

“It’s clear that our justice system is facing big challenges in general, but faces bigger challenge in First Nations and Inuit communities,” Prégenttold KRG councillors. “It’s coming from all parts of Canada: that we need to change the way we do justice in some regions.”

Prégent said the province is willing to work with Nunavik towards alternative forms of justice and social reintegration, like the region’s Saqijuq project.

Saqijuq, which means a change in the wind’s direction, would use community intervention to prevent some Nunavimmiut struggling with addiction from going through the prison system.

“Saqijuq is a program that we all believe in,” said KRG executive director Isabelle Parizeau. “It’s necessary, but it’s not the solution to everything.”