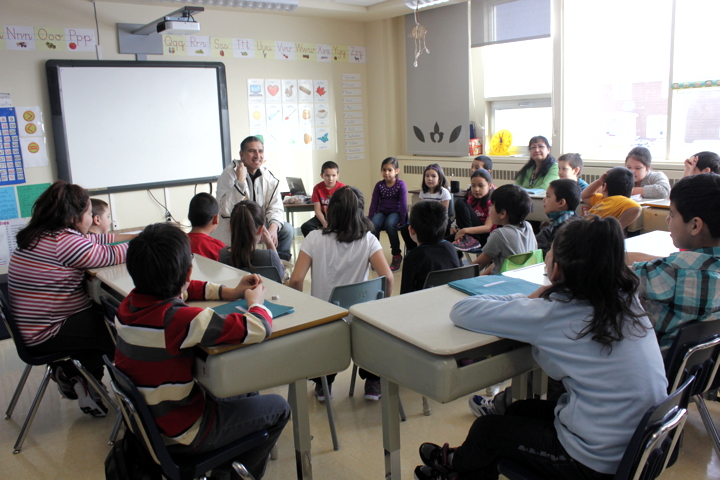 Innu surgeon Stanley Vollant, who is nearing the end of a six-year, 6,000-km project to walk between Aboriginal communities in eastern Canada, stops into schools in every community he passes through to talk to children about mental and physical well being. Here he is, at the front of a class on a reserve in Matimekush, northern Quebec, in 2013. (PHOTO COURTESY INNU MESHKENU) 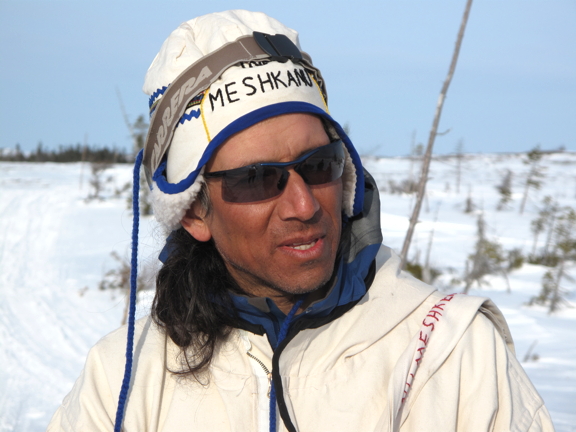 OTTAWA — On the last day of February, 20-year-old Michael Petagumskum will lace up his snowshoes, tie a sled around his waist and start walking north from Matimekush, an Innu reserve in the town of Schefferville near the Quebec-Labrador border.

His destination will be his hometown, Kuujjuaq, about 500 kilometres away.

“It will be a good way to push myself,” says Petagumskum, who plans to enroll in the aboriginal leadership program at Royal Military College in Kingston, Ont., and wants to become a fighter pilot some day.

“This walk will show me who I am and what I can do when things are tough.”

Petagumskum and five other Nunavimmiut will be part of a group of 20 walkers led by Dr. Stanley Vollant, Quebec’s first Aboriginal surgeon, who is from the Innu village of Pessamit, on the north shore of the St. Lawrence River near Baie-Comeau.

Vollant is nearing the end of a six-year 6,000-kilometres series of walks between Aboriginal communities in eastern Canada.

The Innu Meshkenu (Innu Road) project was inspired by a vision the doctor had while walking the Camino de Santiago pilgrimage in Spain.

His goal is to demonstrate the importance of physical activity and clean living, and of reconnecting to the land, to the past, and to one another. People can overcome any challenge, he says, as long as they approach it with perseverance and resilience.

Vollant, who speaks to school children in every community he passes through, wants Aboriginal youth to believe in themselves and to have a dream — and to work towards it one step at a time.

“Healthy lifestyles are a way of life, not a performance,” wrote Serge Déry, public heath director of the Nunavik Regional Board of Health and Social Services, in an email.

“Most of the time, a physically active way of life is linked to sports. People tend to forget that hiking or walking is readily accessible and easily done.”

Although he regularly goes hunting, fishing and camping, Petagumskum mostly travels by snowmobile or boat. The only time he did much walking was while setting up and checking rabbit snares as a kid. But a former teacher recommended him for this trip.

“I like to work hard,” says Petagumskum, who plans to bring some muskox jerky to share on the walk. “I’m going to be tired from all the walking, but not getting a shower for more than three weeks might be the hardest thing about it.”

Vollant’s journeys typically cover a few hundred kilometres, and usually take place in winter or fall. The expedition to Kuujjuaq, which will last about 25 days, is the farthest north Innu Meshkenu will go, and it’s Vollant’s first overland journey onto Inuit territory.

But the hunting and trading route from Schefferville to Ungava Bay has long served as a link between Innu and Inuit families.

“It was a well-travelled area in the past,” says Sandy Gordon, a warrant officer with the Canadian Rangers’ Kuujjuaq patrol who has made the 500-km trip by snowmobile several times. “The last time anybody walked this route was probably in the late 1950s, but it can be done again.”

The last group to cover this distance on foot may have been the Naskapi, a nomadic Innu nation.

After establishing a settlement at Fort Chimo (now Kuujjuaq) in the mid-1800s and moving between other northern trading posts over the next century, the Naskapi migrated en masse from Fort Chimo to the iron-ore town of Schefferville in 1956.

Enticed by the prospect of employment, education and healthcare that did not materialize, the Naskapi shared the Matimekush reserve with another Innu nation until the early 1980s, when they moved 15 kilometres northeast to their current home, Kawawachikamach.

Families on both reserves still have connections to Kuujjuaq.

“I think it’s very important to bring back the spirit of brotherhood between Inuit, Innu and Naskapi Innu,” says Vollant, whose previous walks have followed traditional trails linking southern First Nations such as the Algonquin and Atikamekw.

“We used to be ferocious enemies and fight over the territory of the caribou. Now we face a lot of similar challenges.”

Supported by a small crew of logisticians on snowmobile, walkers making the trek to Kuujjuaq will pull sleds with about 35 pounds of survival gear: food, water, warm clothing, a sleeping bag.

At night, they will sleep atop fir and spruce boughs in canvas prospector tents heated by small wood stoves. The logisticians will shuttle the heavy supplies from camp to camp and cook meals, but everybody will pitch in to help set up and take down tents — a communal effort that emulates the way Aboriginal families used to travel on the land.

The walkers will be in remote hilly terrain, says Gordon, who will help to break and mark the northern half of the trail with the Canadian Rangers — a group he’s been a member of for 42 years.

“March is a good time of year to do this,” he says. “The days are getting longer and it shouldn’t be too wet or slushy. It’ll be good for walking.”

But it won’t be easy, cautions Naskapi chief Noah Swappie, who has done the route about 10 times on snowmobile and has listened to his father’s stories about walking the entire trail.

“It could be cold and the weather will be unpredictable,” says Swappie. “It can be very mild and calm — and then a blizzard.”

A group of Naskapi cleared and marked the southern half of the trail, which crosses their traditional hunting territory, although caribou sightings are rare these days, says Swappie. Having a maintained route might encourage more people to travel to Kuujjuaq over land, he says.

“It’s about time,” Kuujjuaq mayor Tunu Napartuk said when he first heard about the expedition. “This walk will reinforce the ties between the people of Kuujjuaq and the Naskapi. A lot of Inuit youth don’t know about these connections. Sometimes we need to take a step back and go back to basics.

“There’s never enough activities that relate to our culture,” he adds. “Technology is so available to our children, which makes traditions even more important. In this day and age, a group of people walking from one community to another, it’s unthinkable. The timing is really perfect. It’s really going to send out a good message. When you have an idea that seems impossible and you go out and do it, that’s amazing.”

The walkers will depart Matimekush on Feb. 28 and will spend their first night in Kawawachikamach. Follow their progress at www.innu-meshkenu.com/en/. 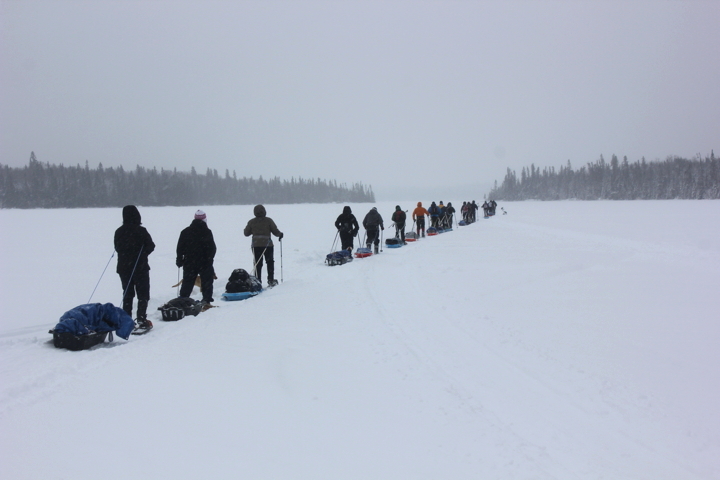 Hardy walkers cross Lac Napoleon near Manawan in 2013, a First Nations reserve in Quebec which is part of the Atikamekw Nation. At the end of this month, 20 people will join Innu surgeon and organizer Dr. Stanley Vollant on a 500-km walk from Schefferville to Kuujjuaq. (PHOTO COURTESY INNU MESHKENU)