Nunavik youth cover up for a good cause 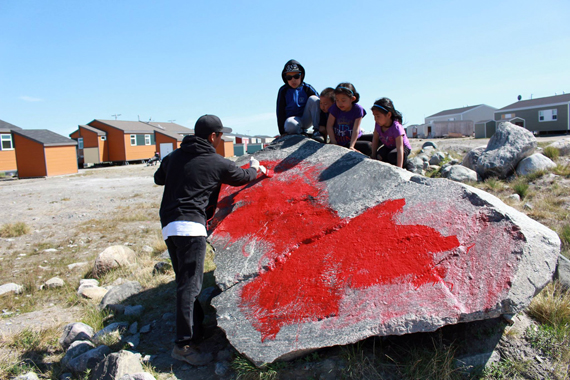 Noah Eliyassialuk, 20, paints a giant red heart over the words “F- the Police,” which were sprayed onto a rock behind his home, while some of his young neighbours look on. (PHOTO COURTESY OF PIVALLIANIQ) 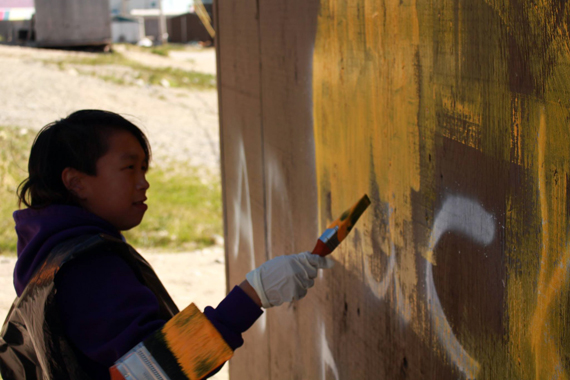 Anna Kanayuk covers up the F-word with some bright yellow paint last week in Puvirnituq. (PHOTO COURTESY OF PIVALLIANIQ) 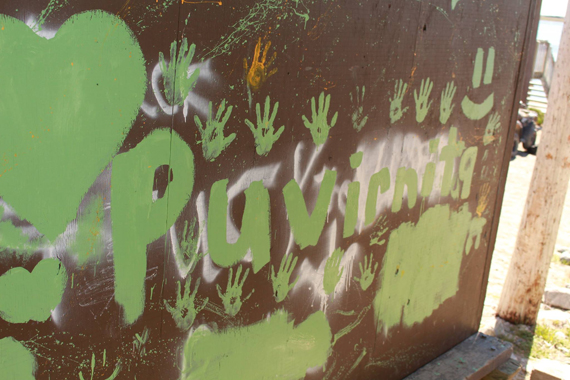 Puvirnituq youth add a personal touch and some community pride to this local building as part of a graffiti cover up program running this summer. (PHOTO COURTESY OF PIVALLIANIQ)

Sometimes, all you need is love — and some paint — to brighten up neglected spaces.

This summer, watch for a group of garbage bag-clad youth armed with smiles and paint brushes, travelling around Puvirnituq in the back of a pick-up truck.

And say goodbye to all those big swear words scrawled across houses, businesses and shacks around the community of about 1,700.

Pivallianiq is running a program called Graffiti Cover Up in Puvirnituq this summer, asking residents whose property has been vandalized to call in and request a paint-over.

In the project’s first week, Pivallianiq has received six calls — many of them to have familiar F-words painted over.

Twenty-year-old Noah Eliyassialuk called in his own project: to cover up a rock behind his home that someone wrote “F The Police” on.

A few hours and some red paint later, the wide, flat side of the rock is sporting a giant heart, visible from a distance.

Other calls came in to paint over graffiti on local homes and shacks. Some Puvirnitumiut like the youth’s work so much, they’re calling to have their shacks painted even though there’s no graffiti to cover up.

“I really let the kids decide what they want to paint,” said Matt Schleck, a Pivallianiq street worker in Puvirnituq leading the project. “The most common are hearts, the sun or something like “I love PUV.”

Some are positive and encouraging Inuktitut-language messages.

The local co-op store and Kativik Municipal Housing Bureau donated the paint and supplies for the youth to use; otherwise, it’s their own imagination fueling the project.

So far, the project’s made a noticeable difference, residents say.

“It brightens up the community and the faces of children who were involved,” said Akinisie Sivuarapik, who works as a project coordinator at the local northern village office.

The local housing bureau estimates that it costs the provincial government about $40 million a year to maintain homes in Nunavik — a few million of that goes to repairing damage caused by vandalism.

Pivallianiq workers hope the colourful new artwork will discourage vandals, and instill a sense of pride in budding young artists.

Puvirnituq residents can call their local KMHB office if they’d like to request a graffiti cover up, free of charge. 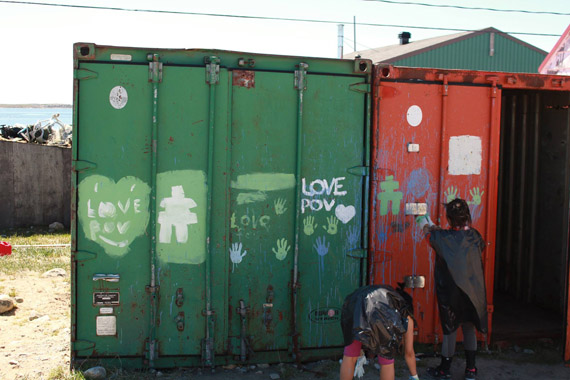 About a dozen youth worked to paint over graffiti on a number of Puvirnituq buildings last week, including this seacan, which now displays colourful handprints and the message “I love PUV.” (PHOTO COURTESY OF PIVALLIANIQ)