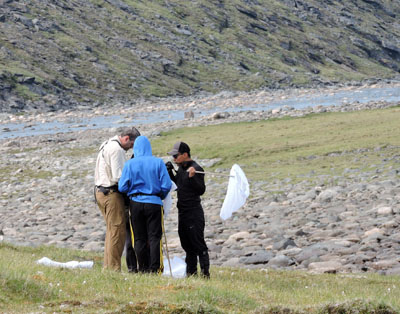 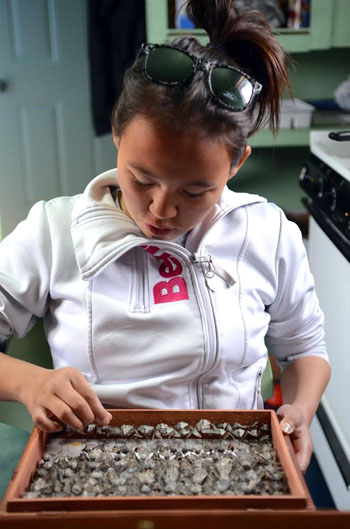 Suzanna Aragutak, of Umiujaq, pins butterfly specimens in a box destined for Montreal, where entomologists will identify them. (PHOTO BY MAXIM LARRIVEE) 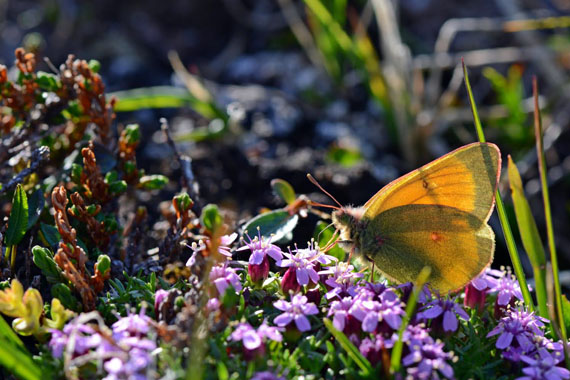 This not-yet-identified butterfly was spotted in the dense tundra of Pingualuit park earlier this month as part of an inventory of butterfly species in the northern region of Nunavik. (PHOTO BY MAXIM LARRIVEE)

Suzanna Aragutak has the careful task of pinning dozens of small and colourful winged creatures into a wooden framed specimen box.

This is the fruit of her labour: the Umiujaq teen spent a week out on the land earlier this month with a net and a basket, collecting one of Nunavik’s most delicate wildlife species — the butterfly.

Aragutak and nine other high school students from across the region worked as collectors and researchers for Nunavik Parks’ third butterfly survey, the second conducted in Pingualuit, Nunavik’s northernmost park near the Hudson Strait.

For a species so sensitive to the climate, a group of youth researchers found dozens of butterflies, and their night-time equivalent, the moth.

The 2016 inventory is still being processed and identified, but Nunavik Parks is sure of one thing: there are more and new species of butterfly fluttering around Nunavik these days, as the climate warms.

Elise Rioux-Paquette, a conservation and education specialist with Nunavik Parks, first teamed up with the Montreal Insectarium in 2014 to determine which butterfly species make their home in Pingualuit.

“I wasn’t sure if there we’d find any butterflies in that region,” Rioux-Paquette said.

“But we explored the area along the Puvirnituq river and found a number, sent them south to Montreal insectarium. We realized there were some very cool findings.”

That 2014 survey found seven species from two different families of butterflies, including the moth.

In 2015, the insectarium sent an entomologist (someone who studies insects) to work with Rioux-Paquette in Kuururjuaq park, but the weather was cool and windy, which kept the butterflies away.

This year, however, Parks Nunavik is reporting its best efforts to date.

That because this summer’s survey crew collected dozens of specimens, including the xestia inuitica, a North American species of moth never been before seen in Quebec.

The group also collected another species of butterfly that’s never been recorded north of Quebec’s Abitibi region, known as the Papaipema inquaesita.

Species vary quite a bit between Pingualuit and Kuururjuaq, which mark the northernmost and southernmost areas of Nunavik. In Kuururjuaq, for example, the more diverse plant life would draw more species of butterflies, Rioux-Paquette said.

In that sense, there’s plenty more surveying to do to get a clear picture of all the butterfly species in the region.

“As pollinators, they’re really important to the ecosystem and flower reproduction,” Rioux-Paquette said. “They’re also the base of the food chain for many animals.

“But what we’re mostly interested in looking at is how sensitive they are to climate change. Where they live can shift very quickly, so it’s important to know what’s there now, because it will probably change.”

All the same, butterflies have inhabited the northern region of Nunavik for as long as living elders can recall. Two elders that Rioux-Paquette spoke to recalled earlier generations capturing butterflies and using the insects’ wings to plug holes in their shoes.

Butterflies live even further north in the Arctic; a Nunavut-focused insect guide published in 2012 counted 32 species of butterflies found around the territory, seven of which survive on the High Arctic Islands.

Most Nunavik-based butterflies are not migratory — they begin their lives as larvae in the later spring, become butterflies and lay eggs over winter until the process starts again.

A much smaller group is able to overwinter in the region by finding shelter between rocks.

Rioux-Paquette said the Montreal Insectarium has plans to eventually host a display of northern butterflies from its Montreal facility, while Pingualuit park’s Kangiqsujuaq-based interpretation centre may also host its own butterfly display. 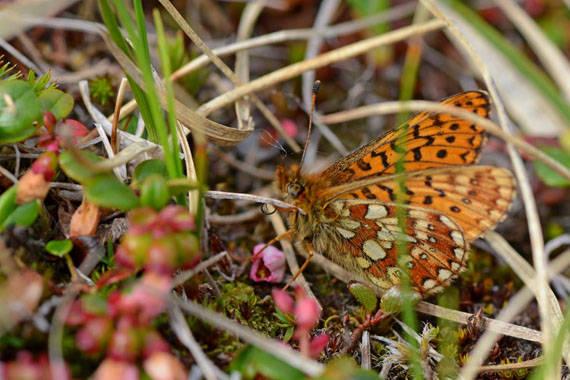 Another unidentified butterfly pictured on the land in Pingualuit park this summer. (PHOTO COURTESY OF NUNAVIK PARKS)