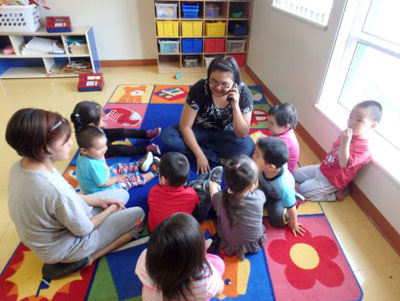 Children and educators are pictured at Aqaivik childcare centre in Kangiqsualujjuaq earlier this year. The provision of childcare services in the region has led to 7.8 percentage point increase in Inuit women’s employment across Nunavik in recent years. (PHOTO COURTESY OF NUNAVIKCHILDCARE.CA)

KUUJJUAQ—The availability and accessibility of child care in Nunavik appears to be the biggest driver behind employment rates in the region—at least for women—a new statistical analysis suggests.

In research prepared for Inuit Tapiriit Kanatami, the Centre for the Study of Living Standards looked at and compared data on the labour market and educational attainment across the Inuit Nunangat.

Researchers found that Nunavik has the lowest educational attainment rate of Canada’s Inuit regions: Fewer Nunavimmiut hold a certificate, diploma or degree than in other regions, with the average years of education in Nunavik sitting at 9.6 years, compared to 9.9 in the rest of the Inuit homeland.

But while education is typically a key determinant of the labour market, the same research found Nunavik has a higher employment rate: 54.1 per cent compared to 42.9 elsewhere in the Inuit Nunangat.

So how do you explain the contradiction?

Social program funding could play a role, given the high levels of money directed to the region, said Solange Loiselle, who works with the Kativik Regional Government’s sustainable employment department.

“So it’s likely that the public sector is creating more jobs and is better able to provide employment opportunities for Inuit with less education in Nunavik than in the other three regions,” said Loiselle, who presented the statistics to KRG regional council meetings in Kuujjuaq earlier this month.

But researchers also looked at various barriers to employment in the region, noting the high birth rate in Nunavik.

They also looked at the Quebec-subsidized daycare program that rolled out across the region in the 1990s.

Men’s participating in the region’s labour force did not move from 64 per cent over that same period.

“They determined that childcare is a significant contributor and likely the most important factor in explaining Nunavik’s paradox,” Loiselle said.

Today, the KRG oversees 19 childcare centres, where most families pay only $7 a day, per child, for care.

But access to education programs remains an issue and a priority for the region, Loiselle said.

“In Nunavik we could have a full employment rate if we’re able to resolve the issue of education,” she said.

The Centre for the Study of Living Standards will release the full report on the labour market in the Inuit Nunangat this winter here.