“Past MPs have not pushed Ottawa hard enough” 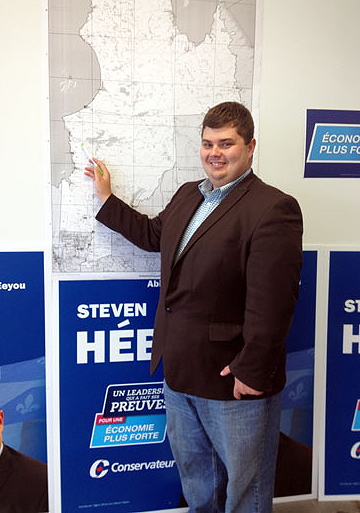 Val d’Or native Steven Hébert is running in his second federal election; his first in the riding of Abitibi-James Bay-Nunavik-Eeyou. (PHOTO COURTESY OF STEVEN HEBERT)

The Conservative candidate running to represent Nunavik in the country’s second-largest riding says one major issue continues to dominate the conversation in northern Quebec — and that’s how to drive economic development.

Steven Hébert, 28, is hoping to unseat New Democratic Party MP Romeo Saganash in Abitibi-James Bay-Nunavik-Eeyou this Oct. 19 with a focused platform, aimed at benefitting communities across the vast riding.

“We’ve been really clear from the beginning of this campaign that there are two major issues we plan to address, and those are the economy and national security,” he said.

“I think there’s a lot of economic potential in northern Quebec,” Hébert said. “We can look at the different mining projects happening in collaboration with (local) communities.”

To support those projects, Hébert points to the Conservative government announcement that it would extend a tax credit for companies that invest in remote exploration projects.

A 25 per cent tax credit is available to projects located more than 50 kilometres from an all-weather road. That automatically covers any Nunavik-based exploration.

“This can help bring a direct benefit for Cree and Inuit communities,” Hébert said in a phone interview with Nunatsiaq News. “This has the potential to bring high quality jobs and in turn, a better quality of life for these communities.”

“We think of the elements of improving the quality of life in Aboriginal communities is really linked to economic development.”

Quality of life also means providing the same level of infrastructure and services in Quebec’s most remote communities that the province’s southernmost regions enjoy, Hébert said.

More northern communities, including those in Nunavik, need to be connected to higher speed internet, the Conservative candidate said.

“It opens these communities to the world,” he said. “That’s a big tool in economic development.”

Industry Canada confirmed last month that it will contribute about $15 million in subsidies over the next five years to support broadband internet in Nunavik, although the region’s network will require a major overhaul by 2021.

Hébert didn’t specify which technology a re-elected government would invest in — it could be fibre optic or improved satellite services. “There’s no one size fits all,” he said.

“Obviously, the population in much of the riding is a young one,” he said. “Access to high speed internet could also allow communities to take part in distance learning through colleges and universities.”

When asked about how his party has approached the housing file in the riding, particularly the shortage of units in Nunavik, Hébert acknowledged that it’s a serious issue.

But he didn’t address the Conservative government’s reluctance to commit to a new funding agreement or catch-up agreement in Nunavik, which have been under negotiation for years now.

“The first thing to do is to sit down with all the partners and figure out how we can move forward on this right away,” he said. “There’s no simple solution.”

“Past MPs have not pushed Ottawa hard enough on that issue,” he said.

Born and raised in Val d’Or, Hébert left the region briefly to earn a degree in political science and public administration from the University of Ottawa.

He’s worked for the last few years in communications at Prime Minister Stephen Harper’s office, and before that, in the office of former Quebec Liberal minister Pierre Corbeil.

Hébert may be the youngest of the riding’s candidates in this election, but he’s not new to campaigning: Hébert ran for the Conservatives in 2011 in the neighbouring riding of Abitibi-Temiscamingue, finishing in third place with about 10 per cent of the vote.

This time around, he wants voters in Abitibi-James Bay-Nunavik-Eeyou to know he’s more than just talk.

“I’m known as someone with a conscience, I’m not the kind of guy to abandon a project midway through,” he said. “People can count on me having a real presence.”

This week, we are running profiles of the Nunavik riding candidates in the federal election. Tomorrow we feature our final profile: the current NDP incumbent, Romeo Saganash.