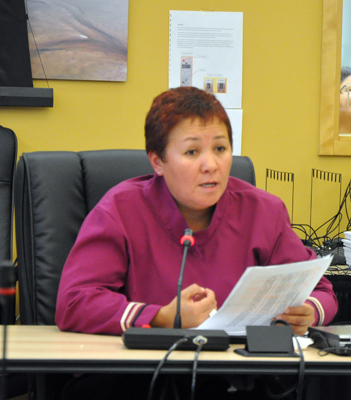 KUUJJUAQ — Nunavik’s Ungaluk crime prevention fund has been revised to give priority to projects that help reduce substance abuse and addiction across the region.

With 70 per cent of the region’s crimes linked to alcohol and drug abuse, and many of them violent, the program has re-focused its efforts on fighting addiction, violence and promoting social reintegration, Ungaluk’s coordinator, Sarah Airo, told members of the Kativik Regional Government council Sept. 8 in Kuujjuaq.

Ungaluk, Inuttitut for the first ring of snow blocks at the base of an igloo, is the result of a 2006 deal with Quebec which traded the construction of a provincial jail in Nunavik for about $300 million, with Quebec paying the KRG and Makivik Corp. at least $10 million a year until 2030.

Since 2006, the program has received roughly $10 million each year to fund wellness and crime prevention activities in Nunavik’s communities.

But a few years into the program, requests to fund things like renovations and trips south were creating confusion for the committee designated to select applicants, made up of executive members of the KRG and Makivik.

The group felt it needed clearer criteria for which projects to approve.

Changes approved over summer now mean that project submissions that target substance abuse and addiction will get priority, with Ungaluk aiming to allocate at least 50 per cent of its yearly budget to those projects.

A second priority will be given to programs to that prevent violence and crime among both youth and adults.

Projects that address the following issues will also get priority:

• the promotion of social integration or reintegration, to prevent reoffending;

• support for victims of crime and violence;

“We have to keep this in mind, that Inuit culture should be included in this,” said Airo, noting that projects that emphasize Inuit culture will also be prioritized.

Airo said the committee will consider applications for funding initiatives that would target individuals who are at risk of offending, or re-offending, or living in a difficult situation.

And while Ungaluk has previously only funded projects for a one-year period, program coordinators noted that some projects need more time to meet their goals. Under the revised program, project organizers can apply for funding for up to a three-year period.

Over the years, Ungaluk has approved funding for a wide range of projects across the region, including Nunavik’s select hockey program, a swimming pool, an elders home, a police strategy to fight drug abuse and visits from Christian missionaries.

Some KRG councillors asked if there were statistics to show that the program has in fact helped to reduce crime in the region since it was implemented.

“We’ve been asking the same questions — are we making a difference?” said KRG chairperson Maggie Emudluk. “I don’t know if [these changes to Ungaluk] will help to reduce crime, but we’ll give it a try. We’ve been told the program is unique to the country.”

Councillors had their own suggestions for how the money should be spent. Kangiqsujuaq councillor Charlie Argnak suggested some money be used to look at why so many Nunavimmiut men abuse alcohol and end up in jail.

Kangiqsualujjuaq mayor Hilda Snowball said many Inuit don’t understand the criminal justice system or what their rights are when they are arrested.

“For example, if someone is arrested and they’re talking and resisting [arrest], he may end up facing more charges,” she said. “We need someone who can go into the community and explain the criminal code.”

“If you have an idea that you think will work, make the application,” Airo said.

The application period for 2015 funding requests opens the first week of October; selection and approval of those requests will be done in early December.