“There are a lot of things we’re able to do, even with low funding” 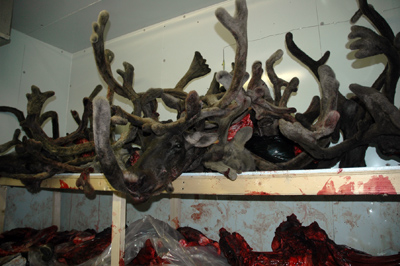 The community freezer in Kangiqsujuaq, stocked with country foods, one of the many services offered through the Hunter Support program. (PHOTO BY SARAH ROGERS)

INUKJUAK — Nunavik’s Hunter Support program offers important and vital services to Inuit beneficiaries, but could use some tweaks, a new review of the program has found.

The Kativik Regional Government, which administers the program in each of Nunavik’s communities, decided to review the 35-year-old program to see it could be improved to better serve Nunavimmiut.

“We heard over and over that Hunter Support is providing an important service,” Adam Gardner, a consultant who led the review, told KRG council meetings in Inukjuak May 28. “People appreciate it and they want to see it continue.”

The Hunter Support Program came out of the James Bay and Northern Quebec Agreement as a way to support Inuit who engage in hunting, fishing and trapping activities.

The program receives about $9 million in funding each year, money that is distributed to the communities to pay for local coordinators, community freezers, hunting equipment, country food and search and rescue expenses.

But more and more Nunavimmiut are depending on community freezers to eat, Gardner told regional councillors — this puts pressure on communities to control distribution and determine who should benefit most from the program.

And Gardner said that responsibility often falls on the municipal councils to manage, creating tension at the community level.

Additionally, some intensive harvesters want to be able to make a living off the land, with the support of the program, and are frustrated that they can’t.

So Gardner, along with KRG executive member Mary Pilurtuut, Joseph Annahatak and Minnie Alaku, spent the last few months visiting different communities in the region, and looking at hunter support programs in other regions.

One example they found: in Cree territory just south of Nunavik, regional government programs offer income security for Cree living a traditional lifestyle on the land. The Cree trappers association also offers training programs for hunters, helps them to market furs and provides coupons to use at local stores.

But Pilurtuut said that during her visit to Whapmagoostui, it was clear that Nunavik’s hunter support program is effective.

“They don’t have stores,” she said of her Cree counterparts. “When Cree are lost on the land, it’s their fire department who organizes the searches. There are a lot of things we’re able to do, even with low funding.”

The review is ongoing but offers some preliminary recommendations, including the need to look at the organizational structure of the Hunter Support Program in Nunavik.

• considering ways to support hunting as a viable economic way of life;

• offering benefits to seamstresses and other domestic production activities; and,

• supporting traditional camps and other initiatives that allow traditional skills to be passed on.

The KRG plans to do a complete financial analysis of the program before presenting a final report in the fall of 2015.