“It’s just a different formula, with the same results” 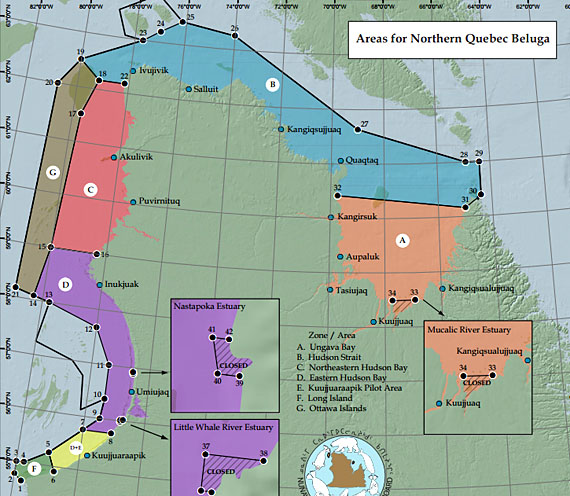 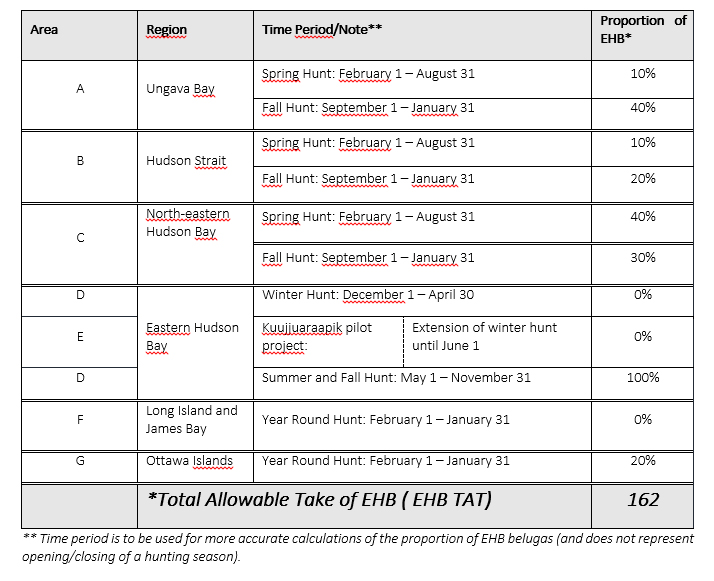 Under the new system, all belugas hunted in Nunavik are counted against the Eastern Hudson Bay quota – now set at 162 – although at different rates, determined by the location and time of year. (IMAGE COURTESY OF NMRWB)

Nunavik’s new management system for the region’s beluga whale hunt should give the region’s communities more flexibility in how they harvest, says the Nunavik Marine Region Wildlife Board.

While Nunavik’s beluga hunting season has generally run from April to November, under the new system announced last week, areas along the Eastern Hudson Bay, the Hudson Strait and Ungava Bay are open to hunting beluga right through until Jan. 31, 2017.

Nunavik’s wildlife board hammered out the details of a new management system for the region’s beluga harvest following a series of meetings with Nunavimmi Umajulirijiit Katujjiqatigiinningit, or hunters associations, in Inukjuak Sept. 8 to Sept. 12.

The new system will still limit the numbers of beluga that Inuit can hunt, through community allocations.

But Mark O’Connor, Nunavik Marine Region Wildlife Board’s director of wildlife management, said the plan offers communities more choice in deciding where and when to hunt.

It was the conservation of the Eastern Hudson Bay beluga population — designated as endangered by the Committee on the Status of Endangered Wildlife in Canada — that led to the region’s management plan in the first place.

But wildlife board consultations showed that the previous system, based on a set quota and hunt periods, created a “use-it or lose-it” feeling among hunters.

Under the new system, any belugas hunted outside that area are still counted against the Eastern Hudson Bay quota — now set at 162 — although at different rates. (see conversion table)

In the Hudson Strait, for example, Fisheries and Oceans Canada has noted that eastern Hudson Bay beluga whales make up about 10 to 20 per cent of the mixed beluga population that passes through.

So as part of the new plan, each beluga whale caught in those areas is considered one-tenth or one-fifth of a beluga whale, depending on the season.

That means that if the entire beluga whale quota was hunted in the Hudson Strait in the spring season, hunters could harvest 1,620 whales.

Previous management plans had required Hudson Bay and Ungava Bay communities to harvest most of their quota in the Hudson Strait, but the travel created financial strains, safety risks and inter-community conflicts.

“Now it really does depend on what the communities’ priorities are,” O’Connor said.

“What we’ve put in place is the minimum basic requirement for what we need to do to conserve the eastern Hudson Bay beluga population.”

Since the new management system arrives later in the year, all of this year’s harvests so far have been retroactively fitted into the new system.

Community quotas will be determined by regional hunting associations at a general meeting in November.

The new plan is not expected to change the overall total number of belugas hunted in the region, the Nunavik Marine Region Wildlife Board said.

It could, however, change which beluga populations are hunted: as part of the plan, a new pilot project will allow hunters from Kuujjuaraapik to harvest James Bay area beluga whales between Dec. 1 and June 1 each year.

Beluga whales hunted from that community between June 1 and Nov. 30 will be considered under the eastern Hudson Bay quota.

But while the new system may provide more flexibility and decision making powers to regional hunting associations, Nunavik hunters say they still face many of the same restrictions when harvesting belugas.

“It’s just a different formula, with the same results,” said Johnny Oovaut, the head of Quaqtaq’s Nunavimmit Umajulirijiit, and a longtime critic of beluga quotas.

You can see Fisheries and Oceans Canada’s beluga harvest records for the region in this PDF document here.