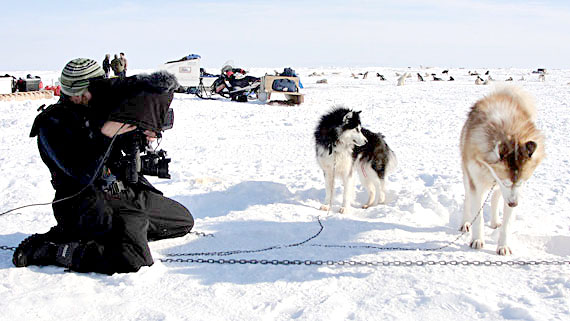 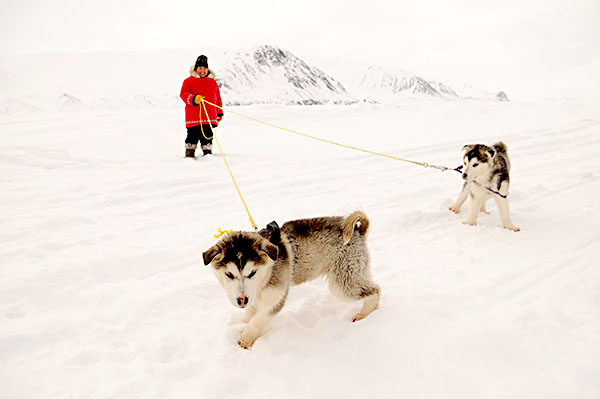 For six days, the Piksuk Media crew travelled with 17 dog teams and their 118 helpers along the east coast of Baffin Island to produce “Race Across Baffin.” (PHOTO BY HIW ENG)

Captured on film, the starting line of the 2010 Nunavut Quest race is a frenzy of cheering fans, barking dogs and the scenic backdrop of Pond Inlet.

If you missed the event — or any Nunavut Quest race for that matter — Piksuk Media Inc. will bring the action to you this week.

The documentary follows the 17 mushers, their dogs, families and support crews along the 500 kilometre trek from Pond Inlet to Clyde River during the 2010 edition of Nunavut’s famed dog sled race.

Episode one introduces viewers to Clyde River musher Joelie Sanguya and his support crew (aged 12 to 76) as they travel to the race’s starting line in Pond Inlet.

Sanguya has been with Piksuk Media since his colleagues Charlotte DeWolff and Ole Gjerstad helped to form the company in 2005.

With the help of one-on-one interviews with mushers and the raw footage of head-cams, Race Across Baffin brings the human (and canine) aspect of the quest to life, on and off the race path.

Viewers meet David Iqaqrialu, the former Nunavut MLA who traded in politics for a dog team. The 2010 race was the sixth Nunavut Quest he competed in.

“The dogs don’t drag heavy loads like they used to,” Iqaqrialu tells the camera, as he sews leads for his dog team. “My father used to have long sleds with heavy loads. Today we don’t use dogs like we used to, some we use for recreation, and some for travelling.”

Raygilee Piungituq grew up caring for dog teams, but she’s new to the role of musher. She’s only one of two female mushers in the race, and she’s struggling to find her confidence.

One of the founders and leaders of the quest, Charlie Innuarak, has a long family history mushing and he’s proud to have two of his sons, Niko and Leo, competing in the 2010 race.

Over the Race Across Baffin’s six episodes, viewers follow the trials of Arctic dog sledding during one of the warmest months of April on record in the region.

One night during the quest, while mushers and crews are sleeping in tents along the coast, the sea ice yhey are camped on begins to crack and break away in the middle of the night, adding new and unforeseen challenges to the race.

But after the long journey, all 17 dog teams arrive safely in Clyde River, to a crowd of residents who hoist each qamutik that crosses the finish line. The celebration carries into the community hall where a feast and awards ceremony is held.

The English language version of the six-part series continues to run on Wednesday evenings through until April, whole the Inuktitut version will air later this year.