Nunavut asked to boost funding for post-secondary program in Ottawa 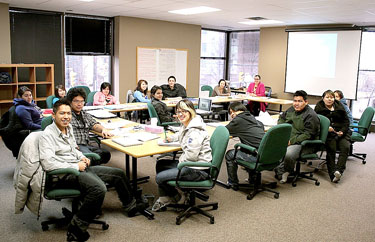 This is one of the new classrooms used by Nunavut Sivuniksavut, the Ottawa-based college program for Inuit youth, at 450 Rideau St. in Ottawa. The program wants to take in more students but now faces increasingly tight finances. (FILE PHOTO) 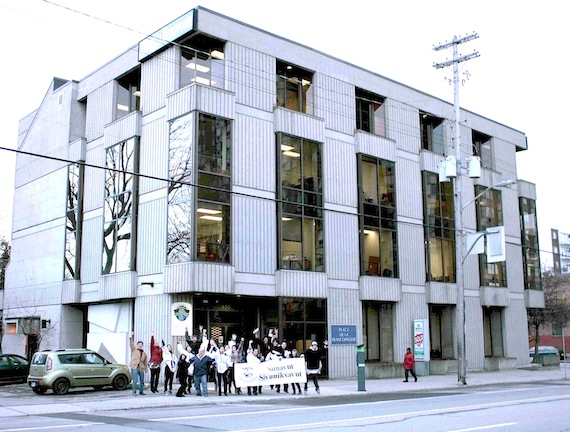 Here’s a look at the new home of Nunavut Sivuniksavut, the Ottawa-based college program for Inuit youth, at 450 Rideau St. in Ottawa. NS said that acquiring the new $2.5 million facility, which includes more than 12,000 square feet over two floors, would be a major step towards enabling the program to significantly increase its enrollment. But that takes money. (FILE PHOTO)

The federal government is urging officials in Nunavut to provide more funding for a post-secondary program for Inuit youth in Ottawa that’s facing a money shortage, newly released documents show.

Nunavut Sivuniksavut is a one-to two-year program for young people from Nunavut. It brings them to Ottawa after they graduate from high school to prepare them for jobs in the territorial government, the federal government or the private sector or to attend university.

The school receives funding from the territory, the federal government and economic development organizations based in Nunavut to cover its annual budget of about $1 million.

The federal government believes that its money accounts for the lion’s share of the school’s money since it funds many of those economic development organizations who then pass it onto the school,.

“One could argue that the federal government provides roughly 75 per cent of the annual NS budget — whereas the GN (Government of Nunavut) only provides 10 per cent,” reads one of the documents.

Officials with the federal department responsible for the school, Aboriginal Affairs and Northern Development, prepared the note on Sept. 2 to brief a federal government official before a meeting scheduled with Nunavut’s deputy minister of education.

Kathy Okpik, deputy minister of education for the territorial government, declined to comment on the figures since she hadn’t seen the documents. However, she said the reason why they hadn’t provided more funding in the past was because the school was so far away.

“It’s out of the territory, and most of what we’ve been supporting has been in the territory,” she said. “That’s not to say we don’t value the program. It’s extremely valuable.”

All of the money the territory provides is through funding that’s provided to whichever post-secondary institution Inuit students decide to attend. The territory gave the school $70,000 through this for the 2010-2011 fiscal year, Okpik said.

The federal request comes as the school is facing some money issues after expanding the program earlier this year. School officials needed to raise $100,000 at the start of this year to accommodate 36 students instead of the usual 22.

The school hasn’t been able to bring in more staff like they had hoped to, he said, but still has enough instructors to run the program as it stands.

One of the meeting’s objectives was to “encourage the Government of Nunavut to provide ongoing operational funding to Nunavut Sivuniksavut,” the briefing note reads. The Citizen obtained the documents under the Access to Information Act.

The federal government is currently in the midst of a major review of Inuit education policies. It is working with officials in the territory to develop a new strategy for education Inuit youth.

About 51 per cent of Inuit youth don’t complete their high school degree, the documents show, while about 36 per cent receive a post-secondary degree of some kind.

School officials are hoping to expand the program further.

Administrators can only accept some of the 50 to 65 applications they receive every year, the documents show. The school purchased a new building on Rideau Street last year to help it reach its goal of doubling the student population in the next five years.

The meeting that was to take place in September has been cancelled and has not yet been rescheduled, Michelle Perron, spokesperson for Aboriginal Affairs, wrote in an email.

Okpik said she would wait until the meeting took place before making a decision about any requests for more funding for the program.

The federal government gave the school $2.5 million to purchase the new building, Perron wrote. It also provides ongoing operational funding for the school.

“The Government of Canada recognizes that for 25 years, Nunavut Sivuniksavut has produced graduates who are making a significant contribution to the economy and prosperity of Nunavut,” she wrote.

Hanson couldn’t say how much of the $100,000 the school ended up raising. He said it received “quite an additional amount” from Inuit organizations that already provided some money, though it didn’t bring them to their target.

“We’re hoping to come close to breaking even this year with the bit we raised from the other organizations,” Hanson said.