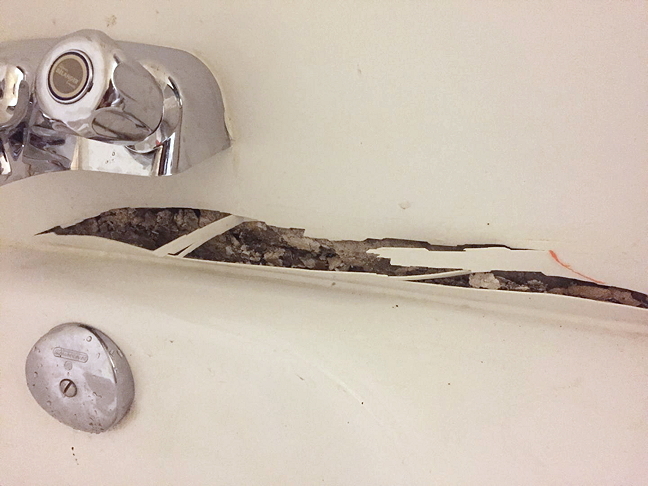 Cracks in the bathroom of the Q residence rooms appear to be growing mould. (PHOTO SUPPLIED) 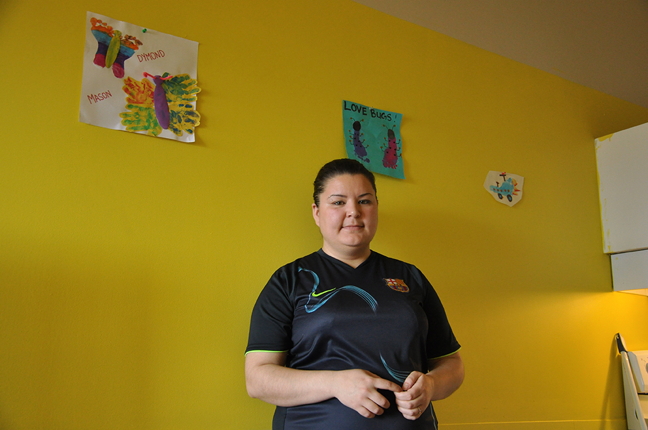 Erin Pameolik, 26, poses Sept. 8 beneath artwork made by her son and hung on the bright yellow walls of Pameolik’s Nunavut Arctic College student residence in Iqaluit. Pameolik said she painted the wall herself after scrubbing the walls to remove the food stains, nose phlegm and filth that she found when she moved into a Q unit located behind Nunatta Campus in Iqaluit, before the start of the school year. (PHOTO BY THOMAS ROHNER) 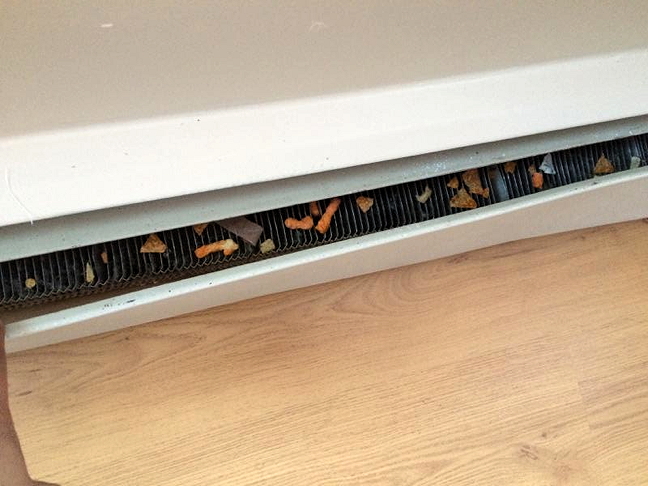 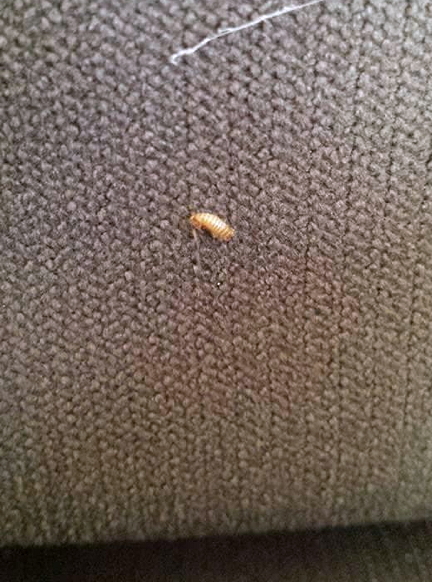 It’s not the kind of start some Nunavut Arctic College students dreamed of before moving into student residences in Iqaluit for the new school year.

Rooms with filthy floors and walls.

Cigarette butts, broken bottles, condoms—used and unused—strewn on the floor.

Insect larvae and food from past tenants concealed in couch crevices.

That’s what a number of college students—all young mothers—recently told Nunatsiaq News they found when they moved into Iqaluit student residences.

Erin Pameolik, 26, said her young son is living in another community.

But Pameolik, a first-year interpreter-translator student, said she wouldn’t want him living with her right now anyway, given the state of her accommodations.

“If people are coming with children or babies, I don’t think it’s healthy for them,” she said, from what the college calls the Q units.

Those are the older residences immediately behind the Nunatta Campus in Iqaluit.

Pameolik said she and four friends spent hours scrubbing the floors and walls.

“The walls were covered with old food and smeared with boogers,” she said, and then shuddered.

Pameolik said she approached the residence manager about the holes and stains in her walls, but he only offered her a thin white paint that Pameolik said had been frozen and wouldn’t cover properly.

So instead, Pameolik spent more than $500 on plaster and paint to make her apartment livable.

A younger niece arrived in Iqaluit to start college this year too, Pameolik said, and she was homesick.

“She’s already homesick, she misses her mom. But she’s so much more homesick because of how filthy everything was,” she said.

When a beetle larva startled her niece as she was resting on the couch, her homesickness got worse, Pameolik said.

“It’s not home away from home at all.”

Eric Corneau, dean of the Nunatta Campus, said he can understand that the transition to college life would be more difficult for students who find their apartments too dirty to live in.

But Corneau said he was “extremely surprised” to hear about the complaints described above, especially since students have not raised the complaints directly with college staff.

“Our staff take great pride in preparing the units—that’s what they spend their entire summer doing,” he said.

Corneau said he meets with college staff weekly this time of year to make sure student apartments are in good shape.

And he encouraged students with concerns to contact college staff or even approach him directly.

“The college is here for students. If that wasn’t our priority we wouldn’t be here. So we’re here to support them,” he said.

All three women who talked to Nunatsiaq News said they raised issues with the residence manager but received unsatisfactory responses.

Corneau said he hasn’t heard anything about cigarette butts, condoms or broken bottles found by students upon moving into residence.

Jenna Natakok, an Inuit Studies student, told Nunatsiaq News in an online conversation that’s what her spouse found when they moved into their student residence in Creekside Village.

Corneau explained the college has several student apartments it rents from Nunastar Properties in Creekside Village, but the college is responsible for ensuring units are cleaned before tenants move in.

Natakok also submitted pictures of a bathtub with wide cracks and what she believes is mould between the cracks.

“I have a toddler who loves taking a bath… but mould on the tub isn’t safe for me or my child,” Natakok said.

And a third student, Roxanne Eetuk, also an interpreter-translator student from Coral Harbour, said her Q unit is still riddled with problems: rusted and filthy heating units, mysterious wires hanging out of walls, no light bulbs.

Eetuk said she too is concerned for the health and safety of her two children living in the unit.