Nunavut communities deliver a resounding No to land sales

Support for land sales low in Iqaluit at 31 per cent, but still highest in Nunavut 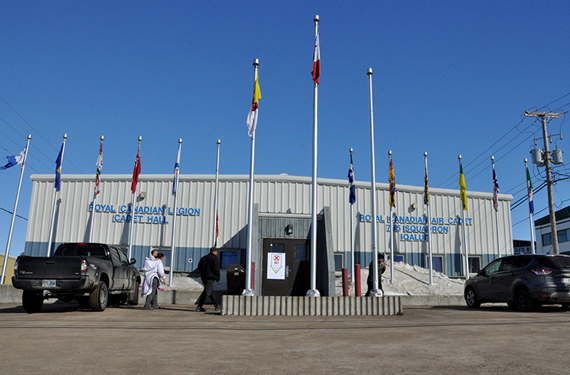 Iqaluit voters head to the polls May 9 to vote in Nunavut’s land sales referendum. With just 31 per cent in favour of municipal land sales, Iqaluit registered the highest support of all Nunavut municipalities. (PHOTO BY THOMAS ROHNER)

Nunavummiut went to the polls May 9 to answer this question: Do you want the municipality of [city or hamlet name] to be able to sell municipal lands?

As No votes began to roll in from communities around Nunavut late May 9, Nunavut’s smallest community, Grise Fiord, appeared to register a resounding Yes.

Twenty-nine of 33 Grise Fiord voters were in favour of the land sales option — or so it seemed.

But early May 10, Elections Nunavut those numbers had been reveresed in error; in fact, 29 Grise Fiord residents had responded No to the ballot question.

The community’s results reflect those in all of Nunavut’s 24 other municipalities, all of which voted overwhelming against municipal land sales.

“The Government of Nunavut is pleased that Nunavummiut have expressed the views of their communities through this referendum,” Joe Savikataaq, Nunavut’s minister of Community and Government Services, said in a May 10 release.

“This process will help determine how municipalities will develop and use their lands in the future.”

In Nunavut’s largest community, also home to the territory’s highest number of private home owners, 69 per cent of voters said No to the question. The turnout in Iqaluit was just 29 per cent.

But support for municipal land sales was actually highest in Iqaluit, followed by Nunavut’s two other largest communities, Rankin Inlet and Cambridge Bay.

The territory’s other communities all registered No tallies between 80 and 95 per cent.

Grise Fiord saw the referendum’s highest turnout, with 60 per cent of registered voters casting a ballot. But turnout was meagre at best elsewhere, staying well below 50 per cent in all but four communities.

The May 9 referendum results don’t differ much from the same referendum held in 1995, when municipalities unanimously turned down the option of land sales.

Under the Nunavut Land Claims Agreement, all Nunavut municipalities now hold fee simple title to most lands within their boundaries.

Municipalities are allowed to lease — but not sell — those lands, and those land leases may not exceed 99 years in duration.

That means leaseholders own the structures they build on leased land under those 99-year leases with the municipal government.

But they may not own the land itself.

Municipalities are allowed to re-visit the issue, now that 20 years have passed since the last vote, under Article 14.8.4 of the NLCA.

Under the territory’s plebiscites act, a municipality can hold another referendum on the subject but not until five years have passed.

Here’s a breakdown of the No vote, by community: