While another Nunavut community detects odour in its water 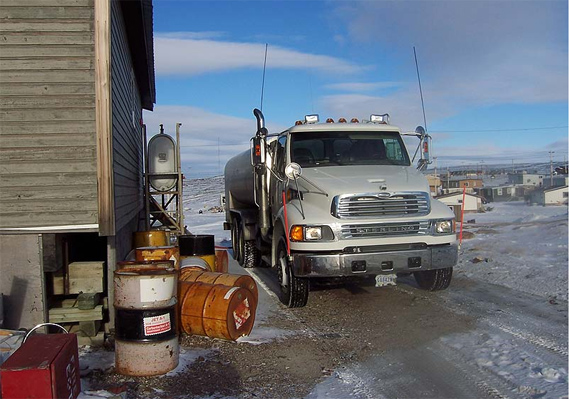 A truck delivers water to a home in Nunavut. Residents of Whale Cove are on another boil water alert, while the GN tries to find the course of coliform in the community’s drinking water. (FILE PHOTO)

For the third summer on record, the Government of Nunavut has issued a boil water alert for the community of Whale Cove.

The measure is in place due to coliform bacteria found in the local water system, a June 27 release said—as has been the case in past years.

Until further notice, health officials have asked residents to boil any water they plan to consume for at least one minute. That includes water used to prepare ice cubes, infant formula, for cooking and brushing teeth.

Summer boil water advisories are not new to residents of the Kivalliq community of about 430, who have seen traces of coliform in their water system on and off for years now.

In 2015, the community endured a 13-week boil water advisory that ran from late June through October, while the GN issued another advisory in the summer of 2016.

In the past, hamlet officials blamed the presence of bacteria on heavy rains in the spring months, which were thought to have possibly contaminated the community’s water source, a lake just outside the village.

But officials never did find the source of the coliform.

This year, officials from the territorial departments of health along with community and government services are testing water samples and investigating the issue, the GN said in a release.

Ian Copland, the hamlet’s senior administrative officer, believes the community needs an upgraded filtration system to prevent the bacteria from getting into the pump house.

“Naturally in every lake there’s bacteria,” he said. “Our problem is that we have no filter system in our water pumphouse to filter the water coming in.

“Plus, we don’t have the UV light that would prevent the bacteria from multiplying.”

Community and Government Services said it has ordered a temporary water treatment plant, which will arrive in Whale Cove by sealift later this summer.

“This water treatment plant is designed to remove the total coliforms from the drinking water,” CGS said in an email to Nunatsiaq News. “This unit will contain a robust filtration system including carbon filtration, UV units and a chlorination system.”

Whale Cove residents with questions or concerns should direct them to their regional environmental health officer at 867-645-8071.

Another community, this one in the Baffin region, is dealing with its own water issue; strong odours coming from taps in Resolute Bay.

The GN said it’s investigating the source of the smell but it doesn’t appear to affect the quality of the drinking water.

The issue is an annual one, the GN said in a release, and appears to be limited to the community’s utilidor system.

The CGS Department is analyzing water samples, the GN said.