Pangnirtung’s popular festival faded away about 10 years ago 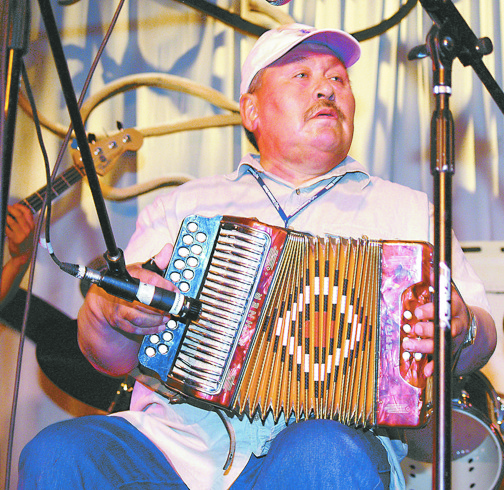 Organizers trying to revive the Pannituq Music Festival are hoping homegrown talents such as Simeonie Keenainak will be in this summer’s festival line-up. (FILE PHOTO)

With the success of Kuujjuaq’s Aqpik Jam, Iqaluit’s Alianait and Igloolik’s Rockin’ Walrus, it’s obvious that Inuit and other northerners enjoy watching and playing live music.

Which is why some people in Pangnirtung have decided to revive one of the territory’s oldest festivals — the Pannituq Music Festival.

“It gets people involved and encourages young people to become musicians,” said Billy Etooangat, one of the festival’s organizers. “They think, ‘well, if they can do it, we can,’ kind of thing. It will have a big impact on our youth.”

Etooangat, who helped put on the first music festivals in Pangnirtung in the late 1990s, said he was happy to see a positive response from his neighbours when he started posting about reviving the festival on the Pangnirtung news and announcements Facebook page.

Immediately, he rallied volunteers for the organizing committee, which has already submitted its papers to the Nunavut government to form the not-for-profit Pannituq Music Festival Society.

After that, they can start fundraising in earnest, inviting musicians to town and organizing some sort of festival for this summer.

Etooangat, an interpretation officer for Parks Canada, said he’s hoping to piggy-back the festival off another northern festival by inviting bands that are already nearby to take another flight to Pangnirtung.

It would have made sense to hold it after Iqaluit’s Alianait festival, but they didn’t get going early enough and that festival unfolds over the Canada Day weekend.

Instead, he’s hoping to hold it after Kuujjuaq’s Aqpik Jam, which is usually held the second week of August.

Etooangat said it’s too early to contemplate a line-up, but he’s hoping to showcase local talent and perhaps one or two bands from out of town.

The Jerry Cans are an obvious choice. The popular Iqaluit-based band just released a new album and Nancy Mike, a member of the band, is originally from Pangnirtung.

There are plenty of local musicians and songwriters, Etooangat said. That was proven in April during Hamlet Days when Pangnirtung put on a talent show, he said: 14 musicians and bands signed up and performed both contemporary and traditional music.

Organizers are hoping the festival can find a way to pay tribute to some of Pangnirtung’s more famous musical talents such as Ismael Naulalik, Rhoda Qappik, and the late country-gospel singer Susa Aningmiuq.

Etooangat said Pangnirtung, with its proximity to Auyuittuq National Park, is an attraction in itself and, in the past, it wasn’t difficult to get musicians to visit, as long as organizers were able to procure airfare sponsorships, and find somewhere for band members to billet.

“They always enjoyed their time in Pang. We took the musicians outdoors, toward the park, with locals, to have a picnic. So we treat the musicians first class,” said Etooangat.

In any case, it will take some serious effort to get the festival going this year but it will happen, in some form, Etooangat promised.

“There’s a lot of keen interest here now and we want to do it annually. That’s our goal,” he said.

“I’m very confident it will go ahead this summer. How many bands we bring in? That’s the question.”