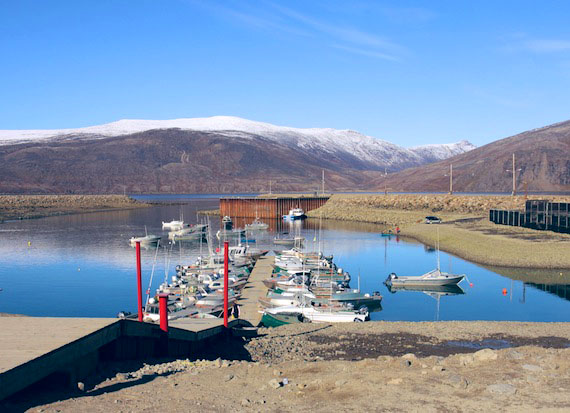 Fisheries and Oceans Canada will soon install a second dock to its harbour, identical to the first, seen here in September 2013 shortly after it opened. The hamlet expects the new dock will fill immediately once it’s completed in early August. (FILE PHOTO)

Fisheries and Oceans Canada will add a second floating dock to Pangnirtung’s small craft harbour in early August, doubling the number of berths for small vessels to 56.

The new structure will be identical to the floating dock that opened to some fanfare last fall, when government officials inaugurated the hamlet’s — and Nunavut’s — first small craft harbour, and called it “Pangnirtung Harbour.”

All materials for the second installation are scheduled to arrive July 27, for assembly within two weeks, according to Pangnirtung’s hamlet office.

Like the first dock, the hamlet office expects the second “will be filled as soon as workers leave the dock,” said Kendra Imrie, economic development officer for the hamlet.

“It’s hugely successful. Everyone loves it,” Imrie said of the dock and harbour facilities.

The first dock has spaces for 28 boats and is full to capacity this summer.

“In some slips, where it’s only designed for two boats, there’s actually three boats squished in, or another boat moored off the back of it,” she said July 25.

Fisheries and Oceans Canada (DFO) installed the first to see how it stood up for one year.

“Once everyone saw it was hugely successful, they went ahead with the second,” she said.

Pangnirtung Harbour is the only one of its kind in Nunavut.

Built by the federal government between 2009 and 2013 at a cost of $40.5 million, it includes a fixed wharf, breakwater, a dredged channel and basin, and a sealift ramp, as well as the floating dock.

DFO will finance the new dock out of its Small Craft Harbours program for 2014-2015, which draws from a $106 million fund devoted to “repair, construction, maintenance and dredging projects at harbours all across Canada,” the federal agency stated in a July 24 news release.

The department could not give a final estimate on the cost of the new dock, although the hamlet confirmed it was less that $100,000.

“We are proud to invest in the first small craft harbour in Nunavut,” Nunavut MP and minister of Environment, Leona Aglukkaq, said in the July 24 news release.

“This additional investment will address overcrowding in the harbour while enabling further access to the inshore commercial fishery and add to Pangnirtung’s marine-based transportation links with other Nunavut communities.”

The new harbour allows fishing, harvesting, and recreational vessels to dock in the community at all times, which “definitely has had a huge impact,” Imrie said.

Cruise ships have also benefited. “In the past they would offload in the mud, and especially for people who have limited mobility, that was a lot more difficult,” she said.

These are ready to take on the pre-fabricated floating surfaces, which were first assembled in southern Canada — then disassembled for shipping to Pangnirtung.

The floating docks are anchored by the supports with series of lines “essentially like elastics” which “allow them to rise and fall with the tides,” Imrie said.

Both docks are to be removed before freeze-up every fall, and reinstalled in spring.

Plans called for a local harbour authority to take charge of the harbour last year, “but it’s not fully established yet,” Imrie said. “It’s in the process.”

The Pangnirtung Harbour Authority will include representatives of local groups that routinely use the harbour, such as fishing companies, the hunters and trappers association, and outfitters.