“The RCMP has not confirmed if there are any deceased persons” 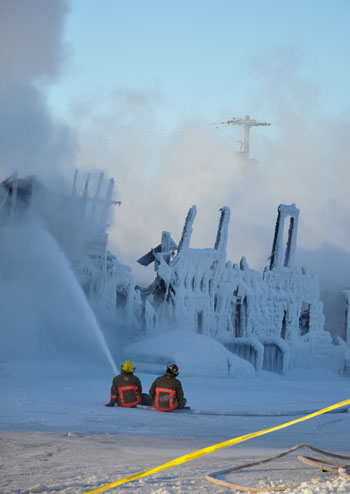 Nunavut’s Office of the Chief Coroner could not confirm early Feb. 27, but says there are “possible deaths” in the late night fire that burned through 22 units in Iqaluit’s Creekside Village row housing. (PHOTO BY SARAH ROGERS)

The Nunavut RCMP, in a statement issued 2:00 p.m. Feb. 27, said, despite previous news reports, they “cannot confirm” that anyone is missing as a result of the Feb. 26 Creekside Village rowhouse fire.

“The RCMP continues to investigate and attempts are still being made to locate all the occupants,” police said in the Feb. 27 release. “The RCMP cannot confirm that anyone is missing.”

But Suramala said she cannot confirm if and how many of the units’ residents may have perished in the fire. “We cannot confirm any deaths, but there might be some,” she told Nunatsiaq News Feb. 27.

CBC North and APTN each reported that the coroner’s office confirmed two fatalities in the blaze, but Suramala said it will be up to the RCMP to confirm any deaths later.

Police now say they have not confirmed any deaths.

“The RCMP has not confirmed if there are any deceased persons within the structure. The Nunavut Chief Coroner has been made aware of the situation,” police said.

They also said the investigation into the fire is expected to last several more days “due to the nature of the fire and weather conditions.”

Remnants of the block of row houses continue to smoulder and the weather remains bitterly cold in Nunavut’s capital, with windchills of – 47 C.

“The RCMP continues to investigate and attempts are still being made to locate all the occupants,” police said. “The RCMP has not confirmed if there are any deceased persons within the structure.”

Police says that additional forensic identification services are expected to arrive in Iqaluit to help with the investigation.

Iqaluit firefighters remained Feb. 27 on the smouldering scene of Creekside Village trying to douse what is left of the fire.

This run off from firefighters’ water continues to freeze, making some roads unsafe or impassable. The city of Iqaluit said that the roads are likely to stay closed for the day.

All of Iqaluit’s schools re-opened the afternoon of Feb. 27 and buses will resume their regular pick-up.