“Money isn’t going to solve this, it’s the community effort that says, ‘no more’” 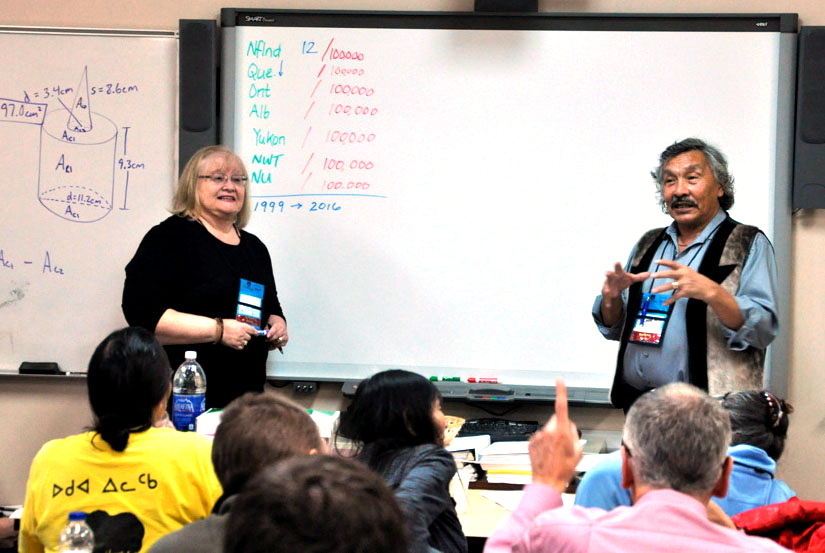 Caroline and Jack Anawak leading a workshop Oct. 28 at the Canadian Association for Suicide Prevention conference in Iqaluit. (PHOTO BY THOMAS ROHNER)

More than 40 participants at the Canadian Association for Suicide Prevention Association’s conference in Iqaluit Oct. 28 packed a classroom at Inuksuk High School to hear Jack and Caroline Anawak offer tools for fighting suicide gleaned from decades of research and activism.

Jack, an elder from Naujaat and former Liberal MP and NDP candidate, asked how many audience members—about half of them Inuit—if the knew someone who had died by suicide.

Everyone in the room put their hand up.

“That’s when my world crashed,” he said.

Caroline, a former government suicide prevention specialist who has lived in the North for nearly 50 years, said Nunavut’s high rates will only decrease if the issue is tackled without fear.

“Money isn’t going to solve this, it’s the community effort that says, ‘no more,’” Caroline said.

CASP held its annual conference in Iqaluit Oct. 26 to Oct. 29, bringing together government, non-government and frontline workers from across the country.

Caroline, who has done suicide research with elders in all four Inuit regions of Canada, told the audience “cold anger” is what will help address the unacceptable suicide rates in Nunavut.

“Cold anger—that’s the kind that makes you focus, makes you think of how to do what you want to do, and be determined,” Caroline said.

“Hot anger is like Donald Trump,” said Jack, and the audience laughed.

Caroline also encouraged the audience to help those in serious distress to escape what she called “avalanche thinking” in favour of “snowball management.”

Avalanche thinking is when you roll all stressful thoughts in your life into one avalanche of negative conclusions about yourself.

“That disempowers a person, makes them feel helpless, like they have no control over their lives,” Caroline said.

Snowball management means separating those stressful thoughts into individual snowballs—or small groups of two or three related snowballs—so that you can manage the stress.

“Just explaining that difference to some people, that can make an enormous difference,” she said.

Caroline encouraged those in the room to get angry, protest and get involved with the suicide crisis in Nunavut.

“Get it on your hamlet agenda, on your local radio, approach the local [recreation] director about youth workshops,” Caroline said.

Jack gave passionate testimony at a coroner’s inquest into Nunavut’s suicide rates in 2015.

That inquest gave rise to over 30 recommendations, which all stakeholders in Nunavut’s suicide prevention plan—the territorial government, the Embrace Life Council, Nunavut Tunngavik Inc. and the Nunavut RCMP—agreed to implement.

But Caroline said she resigned from the Government of Nunavut as a suicide prevention specialist with tears in her eyes when she realized too many out-of-territory bureaucrats simply could not understand the urgency.

“I had people withhold [suicide] statistics from me. They even tried to change my job title, to being in human resources. Can you believe that?” Caroline told Nunatsiaq News after the presentation.

Caroline said it remains to be seen if the momentum the coroner’s inquest created will result in more efforts from the territorial government.