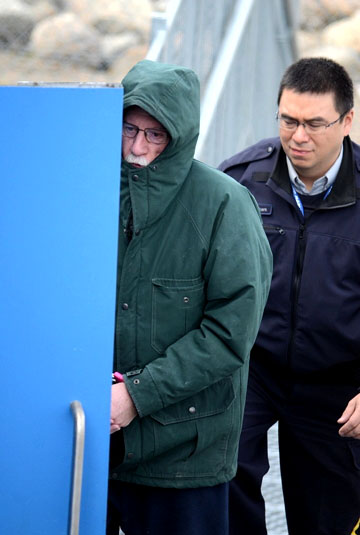 Justice Susan Cooper has accepted four five-year concurrent jail sentences that lawyers submitted to her jointly this past Sept. 29 for four sex crimes that the pedophile ex-priest, Eric Dejaeger, now 69, committed against three children in Alberta nearly 40 years ago.

“It is likely that all victims of Mr. Dejaeger have now come forward,” Cooper said.

Dejaeger, who earned his notoriety for molesting numerous Inuit children in Baker Lake and Igloolik, pleaded guilty to the four charges last month in Iqaluit.

That includes one count of indecent assault for his molestation of a nine-year-old Aboriginal altar boy in Grande Cache, Alta., on at least 10 occasions at home and on the land between 1974 and 1976.

Another two counts, attempted buggery and indecent assault, arise from offences he committed against an eight-year-old boy in Edmonton between 1975 and 1978.

The fourth count, indecent assault, relates to fondling and digital penetration of the Edmonton boy’s six-year-old sister, also between 1975 and 1978.

The brother and sister belonged to a devout Roman Catholic family who Dejaeger befriended while attending Newman Theological College in Edmonton, Cooper said in her judgment.

The children had sometimes been left in Dejaeger’s care over a period of about three years and he committed some of those crimes after taking the children to a religious retreat outside Edmonton.

To ensure her silence, Dejaeger told the sister the sex acts he forced on her were “a secret between her, him and God,” Cooper said.

Dejaeger made similar threats against the other two Alberta children to intimidate them into remaining silent about his molestation, which included genital fondling, oral sex and attempted buggery.

The four charges were filed in Edmonton after the victims heard news reports about Dejaeger’s return to Canada from Belgium in 2011, when he returned to face numerous sex charges related to his work as a priest in Igloolik between 1978 and 1982.

Dejaeger has already served out a five-year jail sentence for nine convictions for sex crimes he committed in Baker Lake in the late 1980s, but he fled Canada for Belgium in 1995 to avoid facing the first set of Igloolik charges.

Following a long, dramatic trial held through 2013 and 2014 at the Nunavut Court of Justice in Iqaluit, Justice Robert Kilpatrick convicted Dejaeger on 24 of 68 charges the ex-priest was facing.

Dejaeger had also pleased guilty to eight other Igloolik charges at the beginning of the trial, bringing the total number of Igloolik convictions to 32.

For those, Kilpatrick imposed a sentence of 19 years in prison, minus eight years, calculated on a two-for-one basis, to account for the four years he spent awaiting trial.

After that, the four Alberta charges were transferred to the Nunavut court.

Cooper imposed four five-year sentences on Dejaeger for each of his Alberta convictions, to be served concurrently — which means he’ll serve them at the same time.

Also, the four five-year sentences are to be served concurrently with the 11-year penalty that Kilpatrick imposed earlier this year, Cooper said.

In explaining her decision, Cooper said judges in Canada are bound by case law to accept sentence submissions that arise from negotiations between Crown and defence lawyers.

She said judges may only reject such negotiated sentence submissions if they are so unprecedented they threaten to bring the justice system into disrepute.

Dejaeger’s career as a child molester may yet produce more work for the courts.

At the end of his court appearance, Cooper noted that Dejaeger is representing himself in an appeal on all or some of his Igloolik convictions.