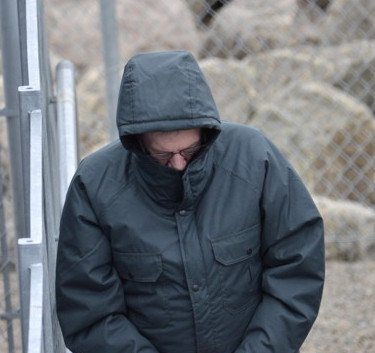 Eric Dejaeger, whose trial began in November 2013, has been in custody since January 2011. (PHOTO BY DAVID MURPHY)

Former priest Eric Dejaeger violated almost every oath taken by a priest, from celibacy to protecting others, and that reveals the weakness of his testimony, Crown prosecutor Doug Curliss said May 27 in his final arguments during Dejaeger’s trial at the Nunavut Court of Justice before Justice Robert Kilpatrick.

Curliss tried to poke holes in Dejaeger’s credibility by emphasizing Dejaeger’s 10 previous convictions for sexual assault, stemming from his time in Baker Lake, and his flight from Canada in 1995, when charges emerged from his time in Igloolik between 1978 and 1982.

Because of his “unbelievable” testimony and because over 40 witnesses testified against him — alleging rape, inappropriate touching and even bestiality — Dejaeger must be found guilty, Curliss said.

Now a Canadian citizen, Dejaeger pleaded guilty to eight counts of indecent assault on young boys on day one of the trial, which began in November 2013.

Curliess pointed to Dejaeger’s evidence about those incidents, when the ex-priest said he didn’t realize he was being inappropriate when he groped the eight boys on the genitals and buttocks.

Dejaeger is an educated man, Curliss said — he should have known better in the first place.

But that doesn’t explain why Dejaeger committed the crimes.

Dejaeger had said in court that the groping was akin to a pat on the head or a pinch on the cheek to “shoo” them out of his upstairs bedroom inside the church.

But “if he takes that as innocuous, then why would he remember it?” Curliss said.

But Dejaeger’s remembers each incident the same way, which Curliss said is suspicious.

Dejaeger and his lawyer, Malcolm Kempt, feverishly took notes when Curliss made his submission. For most of it, Dejaeger sat with his hands clasped on the defence table.

Curliss is banking on Kilpatrick allowing similar fact evidence in the case, an issue the judge will decide after final arguments.

And there’s a lot of similar evidence, Curliss pointed out.

There were many references to children being put on Dejaeger’s lap.

Several witnesses said Dejaeger fed them food, such as horsemeat laced with drugs. Curliss said other witnesses talked about Dejaeger having sex with dogs.

Many said they were raped in several rooms inside the church, such as the kitchen, upstairs bedrooms, the attic and even during confession.

Confession was something the congregants at St. Stephen’s Catholic Church in Igloolik did on a regular basis, especially at Easter and Christmas.

Father Robert Lechat, Dejaeger’s superior in Igloolik, said they would line up down the hall.

And yet, Dejaeger said in the four years he spent in Igloolik, he never once heard anyone’s confession — this despite Lechat being away regularly, for months at a time.

That fact “stretches believability past the breaking point,” Curliss said.

There’s also no reason why witnesses would fabricate their stories, Curliss argued.

He said the Catholic church handed out thousands of dollars of compensation to victims of Dejaeger in the mid-2000s. That compensation period is now over, Curliss said.

Curliss also said most of the complainants are uneducated, and don’t have the capacity to conspire — or collude — against Dejaeger.

Defence lawyer Kempt suggested several times during his final submissions May 26 that the complainants colluded against Dejaeger.

The trial is expected to wrap up this week. Kilpatrick will likely reserve his decision for a later date.