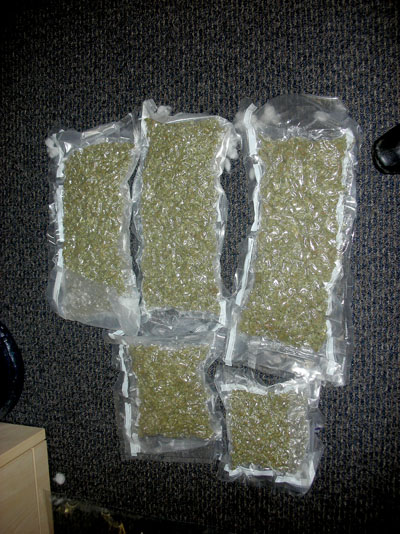 An Igloolik man — arrested Dec. 9, 2010 after police caught him at the Iqaluit airport with more than 1.6 kilograms of marijuana sewn into a stuffed panda bear — knew exactly what he was doing and is guilty of possession for the purpose of trafficking, Justice Earl Johnson found in a written judgment released Aug. 28.

Stephen Qrunngnut, now 50, of Igloolik, had been staying at the Baffin Larga patient home in Ottawa with his daughter, then eight years old.

A non-Inuk man known only as “Shawn” asked Qrunngnut to carry a bag back to Igloolik that turned out to contain a large panda bear stuffed with five vacuum packed bags containing 1,649 grams of marijuana, Johnson’s judgment said.

Shawn asked the Igloolik man to deliver the bag to Silas Kadlutsiak in Igoolik, and gave him five joints and $200 for performing the service, Johnson’s judgment said.

Qrunngnut checked the suitcase under his daughter’s boarding pass, and the father and daughter boarded a plane bound for Iqaluit.

But, tipped off by an anonymous informant, police detained Qrunngnut at the Iqaluit airport after the first leg of his trip.

There, police found the stuffed panda bear, tore it open, and found the drugs inside.

That search gave rise to a lengthy voir dire hearing in January 2013, at which defence lawyer Mark Christie argued that the police violated Qrunngnut’s Charter rights to be free from arbitrary detention and search.

But Johnson ruled that the drug evidence is admissible, even with the RCMP’s Charter breaches.

“I am satisfied that the exclusion of this evidence would exact a heavy toll on the reputation of the administration of justice in Nunavut and would thwart the efforts to keep drug dealers and their couriers off the streets of Nunavut,” Johnson said June 14, 2013, in his voir dire judgment.

He also cited a big study on suicide in Nunavut, Learning From Lives That Have Been Lived, by Dr. Eduardo Chachamovich and Monica Tomlinson.

That study found cannabis abuse is a major risk factor for suicide in Nunavut.

He also said cannabis abuse is a “big social problem in Nunavut” and that “many people who live in poverty and cannot afford it are spending money on this drug instead of providing the necessities of life to their families.”

In the trial that followed, the man’s defence lawyer argued that Qrunngnut did not know the bag contained marijuana, and that he should be found not guilty.

But Johnson said that the Igloolik man was willfully blind about the contents of the bag that Shawn gave him and found him guilty.

His judgment also said the man named “Shawn” had been giving bags purportedly containing “toys and candies” to people at the airport for at least 10 years and that Qrunngnut knew these were drug shipments.

Qrunngnut has yet to be sentenced.