Nunavut court: still no end in sight for Dejaeger trial 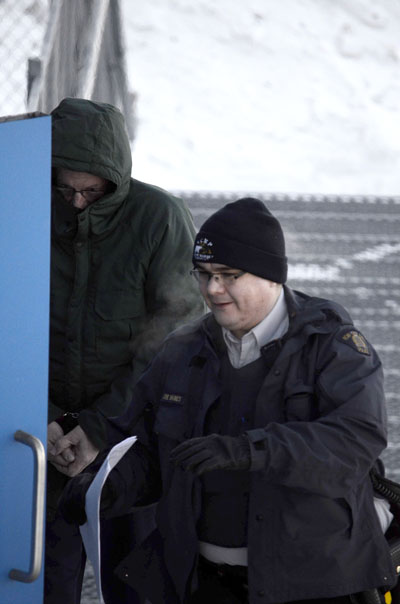 Eric Dejaeger is led into an RCMP vehicle following a court appearance at the Nunavut Court of Justice in Iqaluit. (FILE PHOTO)

The trial of ex-Nunavut priest Eric Dejaeger will likely adjourn for a third time as lawyers continue to wrangle over the admission of certain pieces of evidence.

The Nunavut Court of Justice in Iqaluit was supposed to hear final arguments and conclude the trial by March 21, but that doesn’t look possible now.

That’s because Crown prosecutors presented Justice Robert Kilpatrick with a third application March 19 to have the court consider certain evidence.

In this one, Crown prosecutor Barry Nordin seeks permission to have what’s called similar fact evidence admitted in the case.

Put simply, the Crown wants to combine all the evidence into one package.

In doing so, the Crown would argue that all 41 complainants aren’t fabricating their evidence and that the similar allegations against Dejaeger are not the result of coincidence.

If Kilpatrick denies the request, the Crown would have to prove that Dejaeger is guilty on each individual charge laid against him.

The application would support the reliability of all the witnesses, Nordin said.

Nordin said in court that all the testimonies aren’t a coincidence, and it’s not collusion — “it’s just what happened.”

He said there are 21 male complainants 20 female — most of whom, with two exceptions, were children aged four to 16 when the offences were alleged to have occurred.

Dejaeger remained calm during the proceedings, often whispering to his lawyer.

The defence is expected to reply to the application March 20. After that, Kilpatrick must make a decision on it.

Kilpatrick and lawyers will also talk about when the trial will continue.

Dejaeger has been in pre-trial custody since January 2011.

Earlier this week, Kilpatrick denied two other Crown requests for permission to use certain types of evidence.