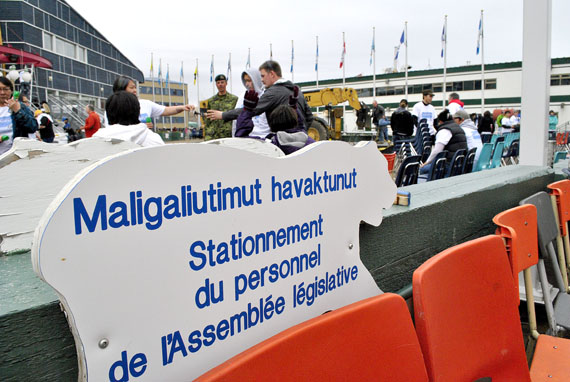 Volunteers and organizers scurried around the parking lot of the legislative assembly building in Iqaluit this morning, making preparations for Nunavut Day activities that were set to start at 11:30 a.m. (PHOTO BY JIM BELL)

Nunavut Day, July 9, is a day of “pride, celebration and joy,” Terry Audla, president of Inuit Tapiriit Kanatami, said in a statement.

“Today is a day for the Inuit of Nunavut to appreciate all that we have accomplished in the past several decades. But it is also a day for all Inuit and all Canadians to celebrate our Arctic traditions and our way of life. Quviasugitsi Nunavut Ullunganit!” Audla said.

Nunavut Day marks the date in 1993 when the Nunavut Land Claims Agreement was proclaimed at a ceremony held July 9 in Kugluktuk, still known then as Coppermine

After Brian Mulroney, then the prime minister, signed the land claims agreement at a ceremony in Iqaluit held May 25 that year, Pauline Browes, then the minister of Indian and northern affairs, flew to Coppermine for the July 9 proclamation event, held at the OMI Lapointe ball park.

“Let us have a great celebration for this is a day to remember. A day we will always cherish. A day we will call Nunavut Day for the rest of our future,” Paul Quassa, then the president of Nunavut Tunngavik Inc., said at the time.