Nunavut deputy minister dishes on what will drive northern economy

“Nunavut has a consumer market that didn’t exist two decades ago.” 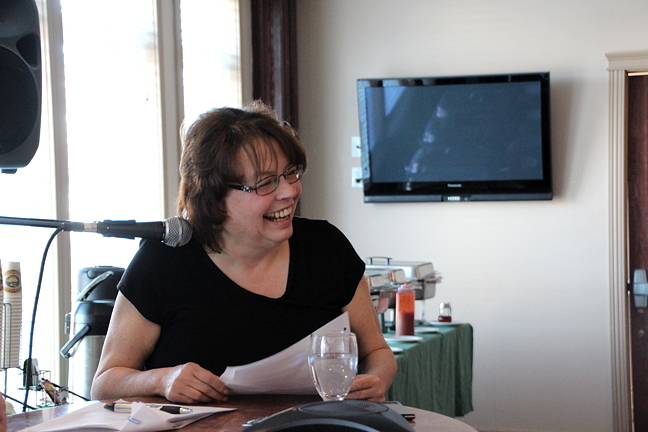 Sherri Rowe, deputy minister of the Government of Nunavut’s department of economic development and transportation, shares a laugh at a May 25 speakers breakfast at Iqaluit’s Hotel Arctic, organized by the Iqaluit Chamber of Commerce. (PHOTO BY BETH BROWN)

Record public spending on infrastructure, along with a surge in mining and exploration, could cause as much economic growth as Nunavut saw in the late 1990s.

That’s according to Sherri Rowe, deputy minister for the Department of Economic Development and Transportation for the Government of Nunavut.

“I believe we are at a very important time in the territory’s development,” Rowe said, over a breakfast of granola and pancakes at Iqaluit’s Hotel Arctic.

Rowe, who has been a bureaucrat and in business for 25 years, was the second speaker featured in a breakfast series hosted by the Iqaluit Chamber of Commerce, May 25.

She talked about ongoing development projects in Nunavut, from mining and tourism to airport and marine infrastructure.

“Nunavut has a consumer market that didn’t exist two decades ago,” said Rowe—and Iqaluit is the centre of that opportunity.

“Nunavut’s economy is set to grow by almost five per cent in 2017,” she said.

An expected doubling of mining projects over the next four years will create employment, and room for new business, or existing businesses, to expand, Rowe said.

She also touched on plans for a deep sea port and small craft harbor in Iqaluit which she said would bring sealift congestion away from the downtown core and resolve some safety concerns.

The chamber’s president, Matthew Clark, wanted to know if the Iqaluit International Airport terminal, due to open in August, would bring added expenses to businesses or users.

Rowe didn’t deny that possibility, but said the new terminal was worth it.

“People are going to be able to go to the washroom once they go through security,” she said, which drew laughs because you can’t do that right now in the existing terminal—there’s no water fountain, washroom or adequate seating in the secure area.

“For people with young children, that’s worth at least another dollar in landing fees.”

Outside Iqaluit, Nunavut’s network of 25 airports remains a large concern for the department, she said.

A 2014 report by her department showed $463 million is needed over 20 years to meet infrastructure needs of airports in Nunavut communities. And the budget for a relied upon Transport Canada program supporting airport infrastructure hasn’t increased since 2000, said Rowe.

On the subject of maritime traffic, Rowe said the voyage of the Crystal Serenity and the discovery of the lost ships of Sir John Franklin have brought increased attention to Nunavut waters. With this comes opportunity for tourism, she said.

In 2016 more than 4,700 cruise passengers visited Nunavut, a 40 per cent increase from 2015. But at 11,550 visits, business travellers represent a larger untapped market, she said.

Some in the audience told Rowe people in the North are not prepared to meet tourism needs, mostly due to a lack of training.

One man said visitors are willing to put up with poor hospitality to see a polar bear, but that they’re not likely to come back.

Another man cited the success seen in Greenland after a college program in hospitality was set up.

“There’s a need for taking advantage of models that work and testing them here in Nunavut,” he said.

In response, Kevin Kelly, CEO of Nunavut Tourism, said tourism training already exists and is available in English, Inuktitut and Inuinnaqtun. Nunavut Arctic College and Nunavut Tourism collaborated on the programs but have no money to deliver them.

Rowe said she agreed with a need for training, but that building a skilled workforce will take time.

Meanwhile, she said her department will focus on making training available at a community level so hamlets are prepared to meet the needs of cruise ships already visiting Nunavut, and to ensure more money stays in communities.

The chamber kicked off its speakers series last month with a presentation by Iqaluit Mayor Madeleine Redfern.

Senator Dennis Patterson is slated to speak at a third early bird brunch in June, to weigh on the topic of a carbon tax in Nunavut.