Project should be “modified or abandoned,” review board says 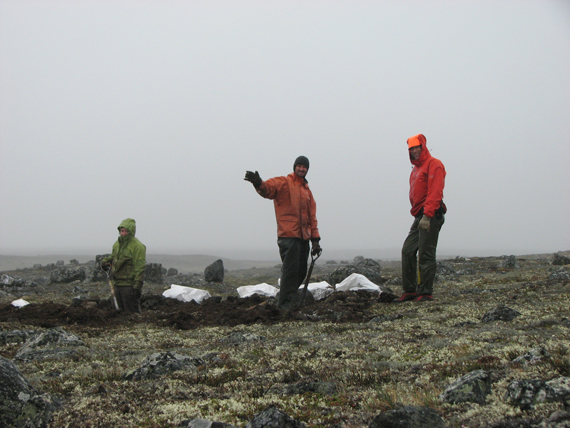 Exploration crews work on the Kahuna project last summer. The bulk sample from its Notch kimberlite yielded a total of 526 diamonds, 96 of which were above the commercial size of 0.85 millimetres. (PHOTO COURTESY OF DUNNEDIN VENTURES INC)

The Nunavut Impact Review Board has recommended a diamond exploration project in the Kivalliq region be revised or scrapped due to local social and environmental concerns.

“The project has the potential to result in unacceptable adverse ecosystemic and socio-economic impacts,” the NIRB said in a screening decision issued April 4.

Those plans included diamond drilling and bulk sampling and the daily transport of personnel, equipment, heavy machinery and fuel from Rankin Inlet, among other activities.

The advanced stage project is still recovering diamonds from a series of kimberlite formations and till samples collected in the summer of 2015, which revealed a high grade sample of 6.5 carats per tonne.

But the NIRB said the project raised too many concerns among Inuit and regional groups, determining the project should be “modified or abandoned,” in its screening decision report and April 4 letter addressed to Indigenous and Northern Affairs Minister Carolyn Bennett.

In comments directed to the NIRB in early 2016, the Kivalliq Inuit Association and Chesterfield Inlet’s Aqigiq Hunters and Trappers Organization cited concerns over Dunnedin’s lack of community consultation and its limited transparency with community organizations.

The Josephine River and Lake areas make up an important part of the cultural identity of the Kivalliq community, the HTO said. Aqigiq said that it has already submitted a proposal to the Nunavut Planning Commission to designate the region as a protected area.

In its comments, the Government of Nunavut said a section of the proposed project in that Josephine River area is located along a natural transitory corridor, where there are likely undiscovered archaeological sites.

In its response, Dunnedin apologized for not hosting community consultation and set up meetings with the KIA and community groups April 12 in Chesterfield Inlet to discuss the project, and later with the community of Rankin Inlet.

The mining company also prepared a draft wildlife and environmental mitigation plan and will work with the GN’s Department of Culture and Heritage to determine if there have been previous archaeological studies in the area.

But those efforts may be too little, too late, as the project’s future now rests on INAC’s decision. Under the Nunavut Planning and Project Assessment Act, the minister can take up to 150 days to respond.

The high grade diamond project was discovered in 2001, though Dunnedin didn’t acquire 100 per cent interest in the project until 2014.

The property includes three main kimberlite dykes: the Kahuna, PST and Notch, the latter producing samples from a 2015 drilling program.

“Early results from Notch confirm an attractive diamond population with most stones being clear and colourless variants of octahedra,” said Chris Taylor, Dunnedin’s CEO, in a March 21 release.

The now defunct Shear Minerals Ltd., along with Stornoway Diamond Corp., explored the area until about 10 years ago.