“It hasn’t sunk in to me yet. I never dreamed of this” 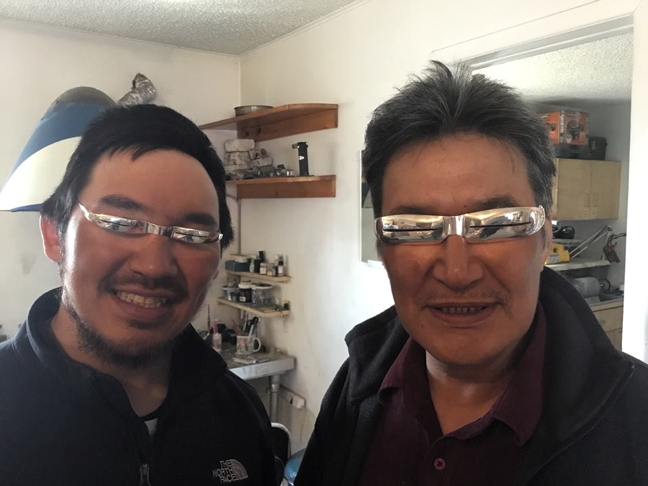 Zacharias Kunuk, right, seen here with Terry Uyarak, is now a member of the Academy of Motion Picture Arts and Sciences, the exclusive Hollywood club that hands out the Oscars every year. (PHOTO BY MATTHEW NUQINGAQ)

In typical Inuk fashion, when Zacharias Kunuk heard that he’d become a member of Hollywood’s Academy of Motion Picture Arts and Sciences, he didn’t think much of it and instead went fishing.

“We got about, maybe, 13 char that we plan to smoke,” said Kunuk, at his Kinguliit Productions office in Igloolik July 6.

“It will be the first time trying to smoke a fish. We have it in salt and sugar right now and hopefully tonight, we start smoking it.”

Truth be told, he thought the email from the prestigious Oscars organization telling him he’d been invited to be a member of the Academy was a piece of Spam and posted it to his Facebook page as a joke.

But it was not fake news.

On June 28, the Academy invited 774 people from 57 different countries to become members of their esteemed Hollywood club. Kunuk was invited as a director, and cited for two feature films—Atanarjuat (The Fast Runner) and Maliglutit (Searchers).

The membership class of 2017 includes all manner of movie-making industry types from actors and writers to costume designers and sound engineers.

The Academy’s website says in order for a director to become a member, individuals must have a minimum of two directorial credits on theatrical films, “of a caliber which, in the opinion of the executive committee, reflect the high standards of the Academy.”

They can also become members if they’ve been nominated for a directing Oscar or otherwise achieved “unique distinction, earned special merit or made an outstanding contribution as a motion picture director.”

Kunuk could have fit into any of those criteria.

“It hasn’t sunk in to me yet. I never dreamed of this,” he said. “It’s like getting an honourary doctorate. These things just come.”

You have to forgive Kunuk for being nonchalant about the latest recognition. He’s already an officer of the Order of Canada, he has an honourary doctorate from Trent University, is a winner of the Camera d’Or prize from Cannes and multiple other international film festival awards.

Atanarjuat was Canada’s top grossing film in 2002, when it was released, and in 2015, a poll of filmmakers and critics from the Toronto International Film Festival (TIFF) named it the greatest Canadian film of all time.

Kunuk takes the accolades in stride. He says success in the movie business is often predicated on making a name for yourself and so these kinds of recognitions help to elevate his name and make him more well known in the industry.

Meantime, Kunuk continues to plug away at film projects and TV shows that reflect the Inuit perspective on life, that portray Inuit culture or bits of forgotten Inuit history and that matter to northern peoples.

These include episodes of polar bear hunting by dog team and open ice walrus hunting.

Kunuk said he bought a drone camera in May to enhance and expand his cinematography. But he still hasn’t figured out how to operate one whilst also driving a snowmobile. He might have to rethink that.

“I got it in May thinking, since I was going out on a polar bear hunt, one of the projects I’m doing by dog team, that I would fly the drone and try to get a shot of the dog team chasing a polar bear.

“But,” he says, stopping to laugh, “we still haven’t mastered it and we couldn’t fly it.”

Kunuk is also in the early stages of another feature film he hopes to make on how federal government agents tried to get the late Noah Piugattuk to bring his clan off the land and into the Igloolik settlement in the 1960s.