Four in 10 Nunavut fires “suspicious” or caused by arson 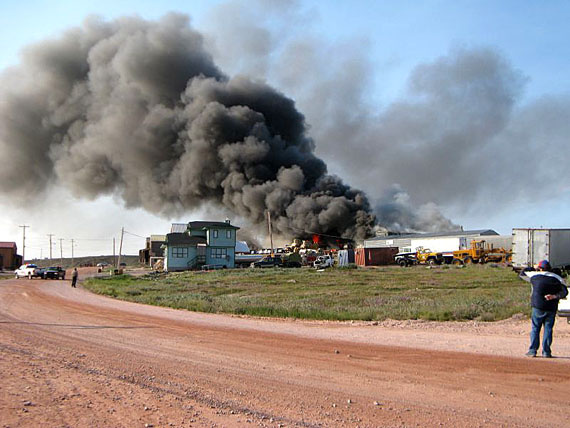 Flames billow high above Baker Lake on the even of July 17, 2012 in what may have been the worst fire ever seen in the community. (FILE PHOTO) 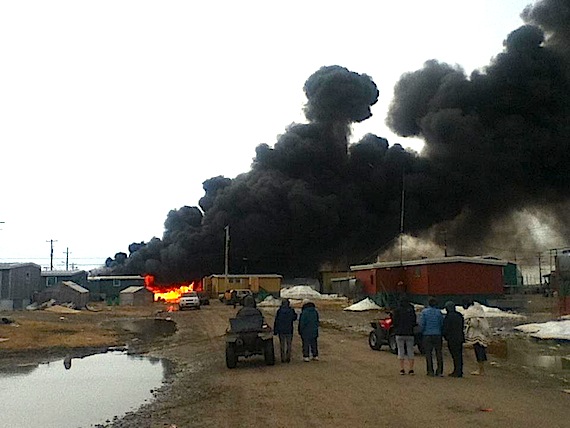 Black smoke rises up into the sky above Arviat on June 8, 2012 when a fire burned down a garage belonging to the hamlet. (FILE PHOTO)

Incendiary fires, including those involving arson, accounted for nearly four in 10 fires. Of these 58 fires, 22 were due to arson, 32 were “suspicious” and four were set by children 11 years or younger.

The other main causes of fire include human error, mechanical malfunction and misuse of smoking material, open flames, and cooking and heating equipment.

That portrait of unnecessary and avoidable loss of life and property is contained in the 2012 annual report of the Office of the Fire Marshall tabled March 13, without fanfare, in the Nunavut legislature.

“The loss of community infrastructure, associated with financial significance, and most importantly fatalities, are substantial enough for Nunavummiut to strive towards the elimination of all types of fires,” the report says.

Iqaluit, which suffered through the Feb. 27, 2012 Creekside Village fire, experienced the biggest losses, with 46 fires causing $9.2 million of property losses, followed Baker Lake, including a July fire at Baker Lake Contracting and Supplies Ltd., where 10 fires caused $4.6 million of losses, and Arviat where five fires, including a June fire engulfing a large storage garage, caused losses of $1.3 million.

Most fires took place in the Baffin region, with 103 fires. The Kivalliq region saw 32 fires, and 22 fires occured in the Kitikmeot region.

Smokers and “open flames” caused $10 million in damages in 90 fires overall in the territory.

Smoking materials and “open flames” also led to 13 minor injuries, six light injuries, one serious injury and six deaths, two of which were connected to the Creekside Village fire in Iqaluit.

Human error, called “human failing” in the report, linked to drug and alcohol use and impairment, accounted for 10 fires and more than $2 million in losses.

Most of the fires in 2012 took place in July to August during the day.