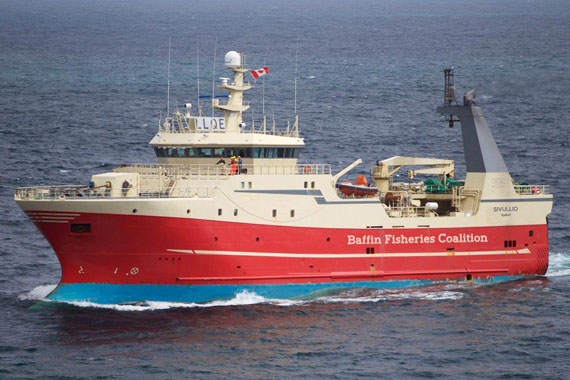 Four Nunavut fisheries groups work with fishers in Newfoundland and Labrador to get turbot harvest cleared for an ethically sourced market. (FILE PHOTO)

Future in-store packaging for Nunavut turbot could boast a blue sticker of approval from the Marine Stewardship Council, if an assessment of the Greenland halibut fishery proves Canadian harvesting practices for the species are sustainable.

Three Arctic and Atlantic fishing zones—known as 0A, 0B and 2+3KLMNO—are now being assessed by a U.K.-based regulator called Acoura Fisheries to see if the turbot fishery measures up to an international standard for selling fish that are sustainably sourced.

That assessment—of both the trawl and gillnet fishery—should be done by next year, according to a June 7 release by the Groundfish Enterprise Allocation Council, which represents year-round groundfish harvesters in Atlantic Canada.

That release called the certification program the most “globally recognized program for wild sustainable seafood.”

To get the assessment started, the Nunavut Fisheries Association has partnered with that harvesters group, along with a seafood producer in Newfoundland and Labrador and the non-profit Northern Coalition Corp., which is made up of Indigenous businesses in Nunavut, Nunavik and Nunatsiavut.

“Respect for sustainable use of our marine resources is paramount to Nunavut Fisheries Association members,” said the Inuit-owned group’s president, Brian Burke.

Those members are Baffin Fisheries, the Arctic Fisheries Alliance, Pangnirtung Fisheries and the Qikiqtaaluk Corp.

Besides showing that the fish are harvested in a sustainable way, the assessment also requires that the turbot fishery in Nunavut does not damage other species in the same waters.

“With this seal of confidence, world consumers will seek out Canadian fish to put on their plate,” said Alastair O’Rielly of the Northern Coalition. “This will translate into greater market access and better value for Canada’s Atlantic and Arctic fisheries.”