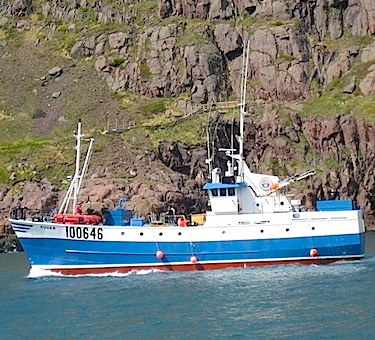 The Suvak, owned by Masiliit Corp., as seen in 2012, the year the corporation, and Captain George Hudson, were charged under the Fisheries Act with fishing outside of Canadian Waters in Davis Strait. The case is still winding its way through court for five years. (FILE PHOTO)

The Nunavut fishing company Masiliit Corp. has won a small victory in trying to prove it was following industry standards when fishing for turbot in Davis Strait in October 2012.

Masiliit Corp., a member of the Arctic Fishery Alliance, and its ship master, Captain George Hudson, have been charged under the Fisheries Act for fishing outside of Canadian waters.

But in what has become a long and drawn out legal affair, their lawyers have argued that because of Davis Strait’s “narrow fishing channel, unpredictable and strong currents and an irregular international fishing boundary,” it is not unusual, “for fishing nets to drift after they have been set,” Nunavut Justice Sue Cooper summarized in her written judgement.

In fact, the defendants say, such drifting is a standard occurrence in the industry.

For that reason, Masiliit and Hudson sought to enter into evidence monitoring reports generated on-board three other vessels by Department of Fisheries and Oceans “At Sea Observers,” to examine the vessels’ locations at the time that the Masiliit vessel, the Suvak, was charged.

It’s not the first time they’ve sought such legal action.

The defendants tried to use those DFO reports as evidence last year, and lost. Cooper ruled in March 2015 that the documents must be disclosed to third parties first so that the other companies involved could weigh in on the potential commercial risks of disclosure.

In her summary judgment, Cooper said that lawyers for the Fishermen’s Union argued against their disclosure saying, to pardon a pun, that Masiliit was on a “fishing expedition,” hoping to have a look at the documents to see what might be “beneficial” to the defence.

The Union also argued “privacy interests” would be at risk if the At Sea Observers or ASO documents were produced in court and that, if those other vessels were found in contravention of the Fisheries Act as well, that the documents might implicate them.

But Cooper dismissed that and other arguments. “Even if such were the case, it is not for the Court to protect parties from legitimate prosecutions,” she said in her written judgement.

Ultimately, the records pass the relevancy test, she said. She ordered the ASO records from the Suvak and three other vessels, for the three years prior to—and the year of—the 2012 charge, to be disclosed to the court.