Communities will host a dozen ships, hundreds of tourists this summer 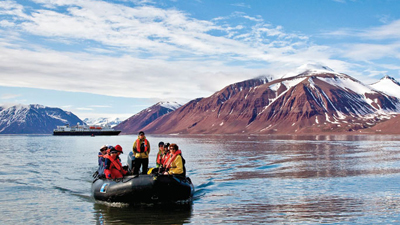 Lindblad Expeditions’ National Geographic vessel, pictured in the background, will sail north to Grise Fiord Aug. 27 with 148 tourists aboard. It’s one of about a dozen cruise ships scheduled to visit the territory this summer. (PHOTO COURTESY OF LINDBLAD EXPEDITIONS)

Nunavut is starting to gear up for the summer cruise ship tourism season.

Once the sea ice gives way to sparkling blue waters, the territory will see traffic from nine cruise ship companies, operating about a dozen water craft through the Northwest Passage this summer season, Nunavut Tourism says.

That means that, starting mid-July, 12 communities in the Baffin and Kitikmeot regions will host cruise ships visits, and with them, hundreds of tourists.

As in summers past, the majority of cruise ship traffic will stop in Baffin region communities this summer.

In the Kitikmeot region, Cambridge Bay, Gjoa Haven and Kugluktuk will each host a handful of cruises.

Cruise ship traffic in 2015 is up slightly this year compared with 2014, although communities that have previously seen traffic — Arctic Bay and Coral Harbour — aren’t scheduled to see any this summer.

The companies operating through the territory aren’t new — many have been returning to Nunavut for years.

But many must re-apply each year for permits to visit bird migratory sanctuaries and wildlife areas or to expand their offerings.

In 2015, six cruise ship operators applied for new permits through the Nunavut Impact Review Board, which determined them all to be exempt from further screening.

Tourism operators Adventure Canada will sail their Ocean Endeavour vessel north in mid-July with 198 passengers aboard. The ship is scheduled to make its first stop in Cape Dorset July 21, before heading off to visit other communities in the Baffin and Kitikmeot regions.

Just this past March, the Canadian Northern Economic Development Agency announced more than $800,000 in funding for Nunavut’s tourism industry.

The money is meant to go, in part, towards a territorial cruise ship management plan, which will look at how to better track, manage and boost benefits from all vessel traffic through Nunavut’s waters.