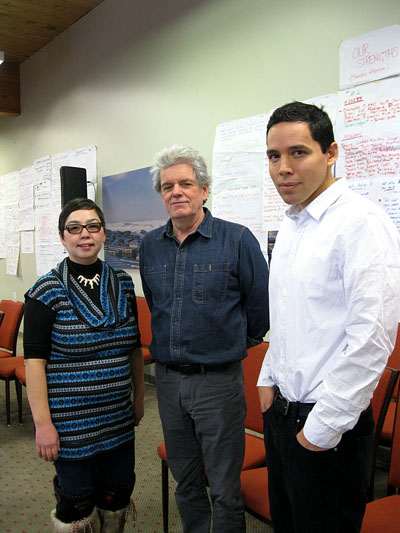 The Government of Nunavut and Nunavut Tunngavik Inc. announced Nov. 28 that they are set to sharpen the first draft of their five-year poverty reduction action plan for the territory, which they hope to approve early in 2015.

Presented at the third meeting of the Nunavut Roundtable for Poverty Reduction in Iqaluit, Nov. 26, the document went through extensive review over the next two days.

More than 70 representatives from the territory’s 25 communities, including municipal officials, Inuit organizations, elders, Inuit youth leaders, non-profit organizations, and business people gathered with Government of Nunavut officials and NTI to focus on aspects of “justice and community healing.”

“They identified what are the barriers, and what is the IQ (Inuit traditional knowledge) part of healing,” Ugyuk said.

Past meetings “recognized parenting as a weak point for our society,” Ugyuk said, “and healing is part of that.”

“We presented a substantial draft here, on the first evening of the roundtable,” said Natan Obed, director of social and cultural development for NTI and co-chair of the roundtable secretariat.

“Part of the initial discussions of the group were to give initial feedback and a critique of the document,” he said. “So we have marching orders from the roundtable to amend and improve the document as it was presented.”

The GN and NTI will lead the changes, and the roundtable secretariat will take the changes back to the next Roundtable for Poverty Reduction meeting in the spring, he said.

“We’re hoping the action plan will be completed in the first quarter of 2015,” Obed said.

The next roundtable, slated for March 2015, will focus on “review and reform of social assistance,” Ugyuk said.

The roundtable “provides leadership, oversight, expertise, and organizational and financial support in identifying and taking action against poverty,” the territorial government and NTI said in a news release put out at the close of the two-day conference.

“We have made great strides towards the finalization of a Five Year Poverty Reduction Action Plan,” Towtongie said in the release.

“The roundtable brings together partners from across Nunavut and unites us in action on fighting poverty. I am encouraged with our open conversations and our commitment to action, and am pleased that the roundtable will be involved in the review of the income support program.”

The government and NTI’s anti-poverty strategy is four years in the making.

The five-year action plan follows up on the Makimaniq Plan, which sought to reduce poverty in Nunavut through a “holistic approach,” taking all factors that cause poverty together, instead of singling out and dealing with each factor separately.