Nunavut government could rake in $15M from carbon tax next year 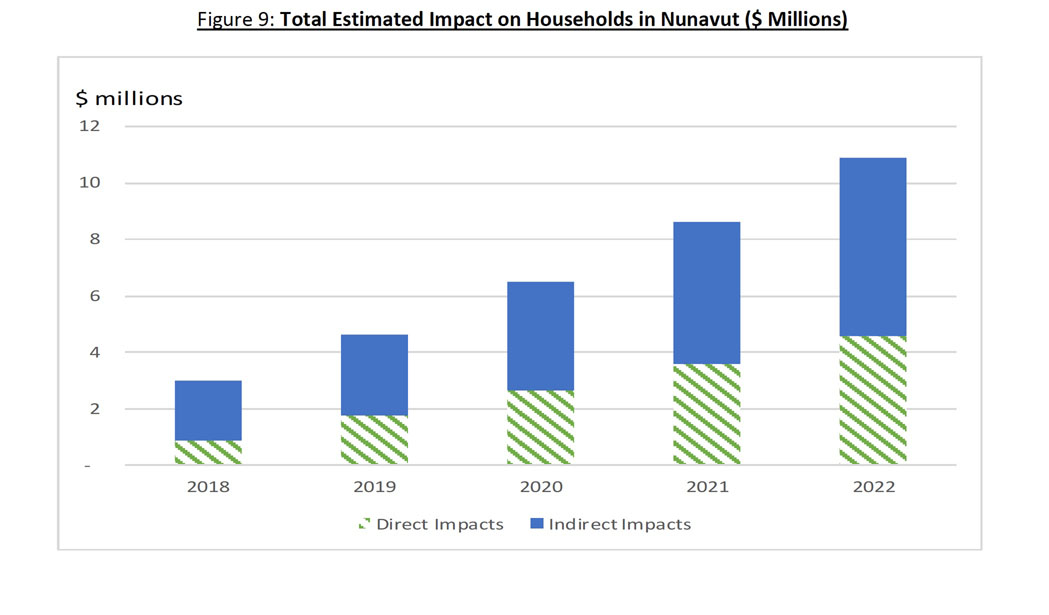 This graph, from a report done by the federal Department of Environment and Climate Change for the Nunavut government, shows that a federal backstop carbon tax would extract $3 million from Nunavut households in its first year and rise to about $11 million by 2022. Nunavut Finance Minister David Akeeagok said the GN can expect to get $15 million from the carbon tax next year.

Starting next year, the Government of Nunavut will receive 100 per cent of all revenue that the federal government will collect from its backstop carbon tax, estimated at $15 million in 2019-20, Finance Minister David Akeeagok said in the legislative assembly yesterday in a minister’s statement.

“In this way, the Government of Nunavut will have full authority over what we do with these revenues,” Akeeagok said.

Ottawa plans to impose the backstop carbon tax in all territories and provinces that do not create their own carbon pricing mechanism, such as a direct tax or a market-based cap-and-trade system.

The federal government developed that plan in late 2016, at a meeting of all provinces and territories, through an agreement called the Pan-Canadian Framework on Clean Growth and Climate Change.

Nunavut signed on to that deal—but does not want to impose its own carbon tax, Akeeagok said.

That’s because most alternatives to fossil fuel can’t work in Nunavut, which means Nunavut cannot respond to the price signals that a carbon tax would send.

“Unlike most other places in Canada, we do not have workable, reliable or cost-effective alternatives to our high-carbon activities,” Akeeagok said.

So for that reason, the GN has decided not to administer its own carbon tax.

Instead, the GN will let the Government of Canada set up a carbon tax in Nunavut—and give all the revenue back to Nunavut.

“Canada will bear all costs of administering and enforcing their tax, but has committed to sharing 100 per cent of the revenues with us,” he said.

That means Nunavut alone will decide how to spend all the carbon tax revenue that Ottawa extracts from Nunavut.

Detailed information on how the GN will use that revenue will be contained in the 2019-20 GN budget, Akeeagok said.

At the same time, the federal Department of Environment and Climate Change has produced a 27-page document that calculates the impact of carbon pricing in Nunavut, now available on the website of the territorial Department of Finance.

For households, the financial impact for 2018 is estimated like this:

Because they consume more, high income earners are expected to pay more, the report said.

About 80 per cent of the impact will be found in seven commodities:

• $70 for gasoline and other fuels for vehicles and tools.

• $41 for food purchased from stores.

But by 2022, when the federal carbon tax rises from $10 to $50 a tonne of CO2 emissions, that impact is expected to triple, the study said.

Despite the impact of the carbon tax, the GN supports efforts to combat climate change, Akeeagok said.

“I would like to emphasize that the Government of Nunavut recognizes the impacts of climate change. Nunavut’s lands and waters are especially sensitive to Earth’s rising temperatures, and Inuit have long understood the need to respect our environment,” he said.