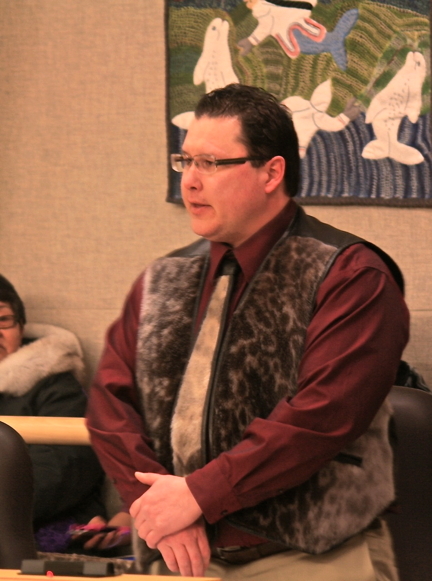 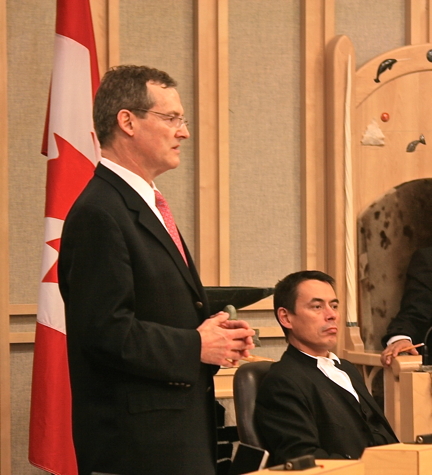 The Government of Nunavut’s projected surplus of $23 million in its 2015-2016 budget, unveiled this week, might look good but Iqaluit-Tasiluk MLA George Hickes cautioned that the territory already owes $305 million in long-term debt, and hopes to increase its borrowing limit to $750 million in the coming year.

“When ordinary people make purchases on their Visa or MasterCard, they eventually have to pay the money back, or find themselves in a lot of financial trouble,” Hickes said in the Nunavut legislative assembly Feb. 26.

“I found it noteworthy yesterday during the budget address, that neither the words ‘debt’ or ‘borrow’ was mentioned,” Hickes said, pointing to Finance Minister Keith Peterson’s Feb. 25 speech.

“It is no secret that Nunavut is looking to ask Ottawa for an increase in our borrowing limit. Can the minister clarify for us today what the status of this request is?” Hickes asked Peterson.

The federal government limited the amount the GN could borrow to $400 million for this fiscal year, 2014-2015, which closes March 31. Nunavut actually borrowed $305 million, which kept it $95 million under the debt cap.

In this month’s budget document, Nunavut’s Department of Finance refers to the remaining $95 million as “available borrowing room,” to be used to guarantee loans by two government-owned corporations: Qulliq Energy Corp. and Nunavut Housing Corp.

The GN will use the rest of its borrowing room to satisfy obligations related to capital leases ($52.3 million) and the Iqaluit airport ($58.1 million), the budget document states.

“The $400 million debt cap that we have now will allow us to complete the Iqaluit airport,” Peterson told Hickes.

“We don’t have much room for debt beyond that,” he said.

“I presented them with a proposal to increase [Nunavut’s borrowing limit] from $400 million to $750 million,” he said.

“I’m hopeful that they will give good consideration and we will get an increase, but I haven’t heard from them yet.”

Peterson’s request to the federal finance department included two proposals: “$300 million for additional housing, and $200 million for investment in energy in Nunavut to upgrade our power plants,” he said.

Even if the federal government doesn’t agree to those specific proposals, they might still agree to allowing the GN to borrow more money.

“We could potentially use some of the increased debt cap to invest in critical infrastructure in Nunavut,” Peterson said.

The minister said he couldn’t yet specify what infrastructure projects those should be, but the higher $750 debt cap “gives us that flexibility, and I believe we can service our debt.”

“The basic concept of paying your debts is fairly simple,” Hickes said in a follow-up question. “Can the minister outline how the government plans to service its debt in the coming decade?”

“It’s a fairly simple explanation. We’re going to be very prudent financial managers,” Peterson answered, “spending within our means, and hopefully produce annual services that allow us to service the debt.”