If the name change is approved by the Minister of Community and Government Services, Repulse Bay councillors must decide whether to solicit a new hamlet logo or just insert Naujaat where it says Repulse Bay. 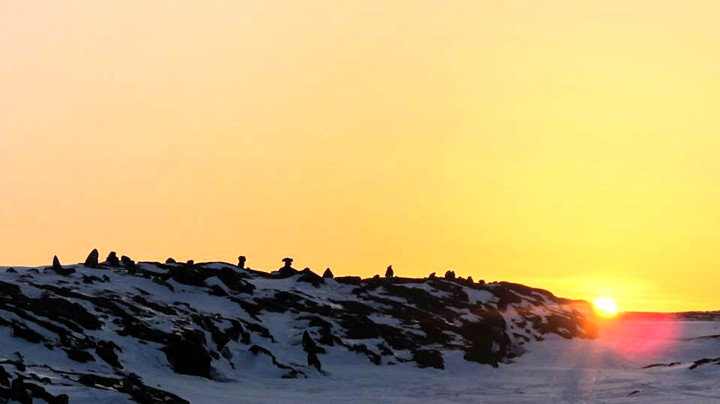 The sun sets beyond a hill dotted with inuksuit outside of Repulse Bay in this photo taken by native Repulse Bay elder Piita Irniq. The Repulse Bay hamlet council has submitted an official request to the Nunavut government to change its name to its traditional Inuktitut moniker: Naujaat. (PHOTO BY PIITA IRNIQ)

It’s official: the Hamlet of Repulse Bay wants to change its name to Naujaat.

A June 19 news release said the hamlet council has passed a motion to make a formal name change request to Tom Sammurtok, the minister of community and government services.

According to Nunavut’s Cities, Towns and Villages Act, if the minister considers the name change, “to be in the public interest, the minister, on the recommendation of the Executive Council, may, by order, change the name of a municipal corporation.”

The executive council is the legal name for the Nunavut government’s cabinet.

Kowesa Etitiq, Repulse Bay’s senior administrative officer, said he isn’t sure if the minister will have to wait until the October legislative sitting to get a recommendation from cabinet, or whether it can be done sooner.

John Quirke, clerk of the legislative assembly, was not immediately available to answer that question.

“I sure hope we don’t have to wait for the fall,” Etitiq said.

During the May 12 mayoral election, which brought in new mayor Solomon Malliki, Repulse Baymiut were also encouraged to vote on a non-binding plebiscite that asked whether they supported changing the hamlet’s official incorporation to Naujaat which means, in English, “baby seagulls.”

The name refers to a cliffside seagull nesting site above a lake a few kilometres northeast of the community, Naujaarmiut elder Piita Irniq said.

The results of the plebiscite were somewhat split: 82 residents voted in favour of Naujaat and 73 voted to retain Repulse Bay.

It was left up to the new mayor and his councillors to decide whether to honour the plebiscite’s results. They did so at a regular council meeting June 17.

Reached at his mayor’s orientation training in Rankin Inlet June 19, Malliki said the motion from council was unanimous, but even so, people have mixed feelings about it, including himself.

“I don’t know what to say. It’s hard to describe it,” Malliki said. “I grew up in Repulse Bay and now it will be Naujaat. For me, I’ll probably use both names for a while, until I get used to it.”

Irniq, who pushed for the plebiscite by writing a letter to the former mayor and by campaigning for the Naujaat side prior to the vote, was overjoyed by the news.

“It’s not a name change, really. It’s reclaiming our name,” said Irniq, from his Ottawa home. “It’s something that every other community in Nunavut should do — reclaim, retrieve, take back what they’ve lost over the past 100 years. You get your identity back as a community.”

He said even some of the traditional names such as Taloyoak, Kugluktuk and Pangnirtung should apply to change the spelling of their names to reflect standard Inuktitut pronunciation, rather than their current Anglicized forms.

“All this would be good for Inuit,” Irniq said.

Etitiq said there won’t be much involved in changing the name — new signs and stationery, legal fees — but he said it’s too early to tell how much it will cost.

It’s still unclear whether the Kivalliq community — whose mostly Inuit population numbers 999, according to the hamlet’s website — will change its hamlet logo as well as the name or just insert Naujaat where it now says Repulse Bay.

“”That will be up to the mayor and council to decide,” said Etitiq.