Nunavut hamlet to get playground after repeated delays

A suspected theft, and lack of materials, have dogged Coral Harbour playground since 2014 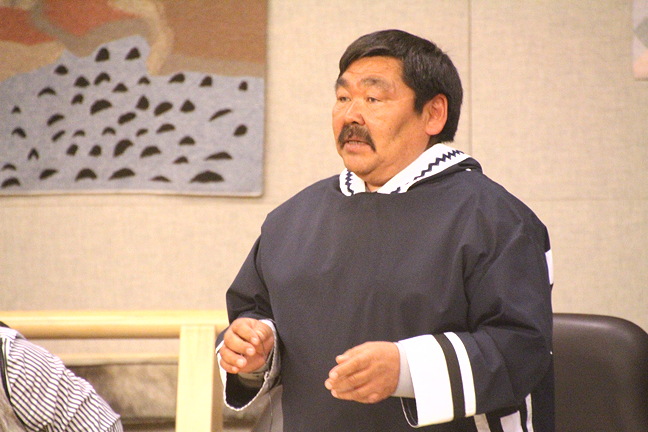 Aivilik MLA Steve Mapsalak asks when children in Coral Harbour can expect to get a playground during a June 6 sitting of the Nunavut Legislature. (PHOTO BY BETH BROWN)

School children in Coral Harbour can count on a new playground this summer, according to Nunavut’s education minister, who says he won’t let construction “slide” anymore.

The single-school community has been without a playground for a few years despite the Government of Nunavut having allocated money to build one, MLA for Aivilik Steve Mapsalak told members of the legislative assembly, June 6.

“No playground has been put up yet, ” said Mapsalak, who then asked the education minister for an update on construction of a “functioning and safe” outdoor playground in the Kivalliq community of 890.

“To date nothing has been done and the school children have nowhere to play,” Mapsalak said.

Judging by Education Minister Paul Quassa’s response, the playground project may have swung out of control.

Material for an outdoor playground, bought by Sakku School, arrived in the community in 2014, Quassa told listening members.

“In 2016 they did try to start setting up the playground,” he said.

But when workers from the contracted company, GC-North Construction Inc., showed up to put the play pieces together, they realized no foundation material had been ordered to build a playground base.

The foundation material did eventually arrive, but problems didn’t end there.

“When they started taking out the playground material we found there was vandalism involved,” Quassa said. “There were no nails and other required material to build the playground.”

It was last fall by the time the missing—and allegedly stolen—materials arrived so construction had to be put off for yet another year.

“To date we should have all the material and we look forward to start constructing the playground in the summer of 2017,” Quassa said.

He said the playground will be finished shortly after construction starts, and, that other communities, including Baker Lake, Naujaat and Pond Inlet, can also look forward to seeing new playgrounds constructed, but no timeline was supplied.

“We have to make sure that there’s a playground constructed near every school,” Quassa said.