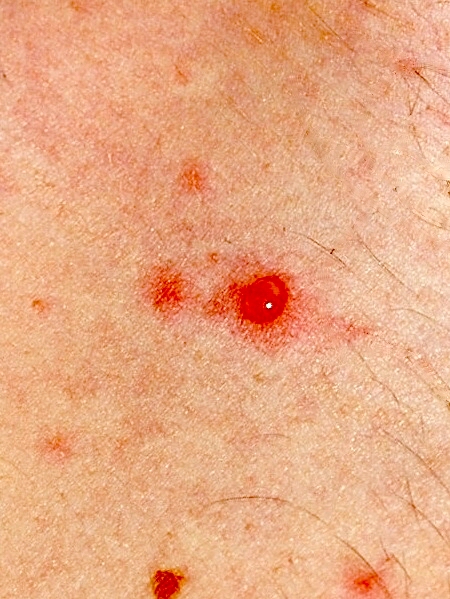 This is what a single chickenpox blister, typical of the early stages of the rash, looks like. (PHOTO COURTESY OF WIKIPEDIA COMMONS)

There have only been a “handful” of recent chickenpox cases in the Hudson Bay community of about 900, said Dr. Kim Barker. Still, she is calling for a “more precautionary” approach against this highly contagious and potentially dangerous illness.

The Health Department sent out a public service announcement last week to advise anyone in Sanikiluaq whose household has a member showing symptoms of chickenpox to go to the health centre for treatment and prevention information.

To help prevent the spread of chickenpox, the PSA also advises avoiding contact with others who have chickenpox and are in the contagious stage. That’s when blisters, or pox, have not yet crusted over.

If you have chickenpox, the PSA asks you to stay home until your chickenpox spots are no longer contagious.

Chickenpox can also affect the immune system of those who have not been vaccinated or previously had chickenpox, the PSA said, but it can be even more serious for pregnant women.

“If a pregnant woman has chickenpox, her unborn baby may also be at risk and (she) should access the health centre immediately,” the PSA states.

“When we get a number of cases of chickenpox, our biggest concern is protecting pregnant women,” Barker told Nunatsiaq News. “The virus can be quite harmful to the infant.”

If you develop chickenpox during pregnancy, you are at risk of complications such as pneumonia, the Mayo Clinic says in its online description of the illness.

If chickenpox develops during the first 20 weeks of pregnancy—particularly between weeks eight and 20—the baby faces a slight risk of a rare group of serious birth defects.

If chickenpox develops during the few days before you deliver to 48 hours after birth, your baby might be born with a potentially life-threatening infection called neonatal varicella.

A pregnant woman who has been exposed to chickenpox can receive an immune-boosting injection, but that needs to be given within a 96-hour window after exposure, Barker said.

The chickenpox virus, which causes an itchy rash and red spots or blisters on the body, spreads easily because it may take 10 to 21 days for symptoms to appear after infection.

A person then becomes most contagious from one to two days before the onset of the rash to shortly after that—so you can’t always tell whether someone is contagious.

Other signs and symptoms of chickenpox can include a fever, loss of appetite and tiredness.

Most Nunavut children under five have received the chickenpox vaccine, which the Government of Nunavut now administers in two doses.

“We’ve come to realize that over time it’s more effective when given twice,” Barker said.

She was unable to supply numbers of chickenpox cases in Nunavut: although chickenpox is a reportable disease, often health workers neglect to report it to the Health Department.