“Damage to buildings caused by thawing permafrost can be costly” 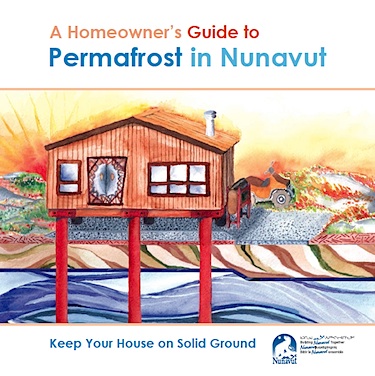 The Government of Nunavut released its “Homeowner’s Guide to Permafrost in Nunavut” on May 13.

Mindful that most buildings in the Nunavut are built on permafrost, which is subject to greater danger of melting due to global warming, the territorial government released a booklet called “A Homeowner’s Guide to Permafrost in Nunavut” on May 13.

“The new guide provides homeowners in Nunavut with the knowledge and resources to make simple household changes to help preserve permafrost beneath their homes,” Environment Minister James Arreak told members of the legislative assembly.

“This guide provides information on what permafrost is, how climate change is affecting it, the impacts on houses from thawing permafrost, and the importance of preventing thaw.”

Complete with illustrations, photos and charts, the booklet shows that most homes and other buildings in Nunavut were built on soils and rock containing ice that is frozen year-round “for at least two years.” Houses in Nunavut “are designed with the understanding that ground and permafrost under the home will remain solid – keeping the foundations from moving,” the guide states.

“With the onset of climate change” and warming temperatures, “permafrost is beginning to thaw in more regions than before, and this is causing some building foundations to become less stable,” the guide says.

The 22-page booklet goes on to describe building foundation types, identifying possible hazards in the ground under your house, and measures to take to prevent damage to the building. These include prevention of snow and ice build-up around buildings, and a “foundation checklist” to keep your house and its foundation in “good repair.”

“Damage to buildings caused by thawing permafrost can be costly to not only homeowners, but also to government and private companies,” Arreak said. “By promoting good building maintenance and practices and providing education about the importance of permafrost and the impacts of climate change it is expected that some of these costs will be reduced and will lead to significant future cost savings.”

Prepared by the territorial department of environment, the guide is written in simple language “targeted to the average homeowner,” the department stated in a news release. It is available online at the Nunavut Climate Change Centre’s website.