Nunavut information and privacy czar to get more powers 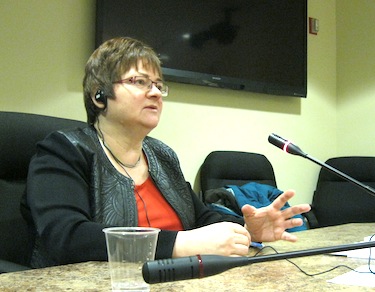 Nunavut’s information and privacy commissioner has a promise from the territorial government to give her office investigative powers.

The change is part of a set of amendments to the territory’s Access to Information and Protection of Privacy Act, that were assented to in June 2012.

Daniel Vandermeulen of the Department of Intergovernmental Affairs confirmed April 18 that the Government of Nunavut expects the amendments “to come into force in the spring.”

The changes give privacy commissioner Elaine Keenan Bengts and her office the power to investigate government agencies for breaches of privacy.

Keenan Bengts said the amendments are a major victory for her office, that finally shows the government is taking her recommendations seriously after almost 15 years of advice that went ignored.

“There are a lot of things that need to be done in Nunavut,” the commissioner said.

“Maybe access to information is one of those things that is on the backburner. But things are happening and I’m pleased to see, however slowly – that I can now take these recommendations off my list of forever-to-dos.”

The amendments to the access to information act give the privacy commissioner the power to investigate breaches of privacy by government departments and agencies, and require public bodies to report privacy breaches to the commissioner.

Keenan Bengts reported this April 18 to the legislative assembly’s standing committee on government operations during its hearings in Iqaluit.

Speaking to the 10 MLAs sitting on the committee, the commissioner called the amendments “a huge victory.”

“I’ve been trying to get this since day one. So this is the first step.”

The Yellowknife-based lawyer does the work in a part-time capacity.

The position has always been purely advisory, created to give independent advice and review incidents in which the act may have been violated.

A persistent issue that has dogged Keenan Bengts in recent years is the government’s lack of response to her recommendations – a complaint which the commissioner repeated in her annual report to the standing committee.

“I have had a less than stellar response from at least one public body and I am beginning to be a little concerned the direction things are taking as a result,” Keenan Bengts told the committee.

The commissioner noted that her office received 22 requests for review of access to information files, up from just five in the previous year.

The main source of the increase was a large number of requests for information about contracts granted by the GN to businesses in the private sector.

These kinds of requests seem to be coming across my desk more and more often,” she told the committee.

Their increase, she said, is due to a lack of urgency to act on the requests. Moreover, Keenan Bengts said her follow-up on the files also ran up against delays and dismissiveness by access to information coordinators.

Asked by Tununiq MLA Joe Enook for her opinion on why this is happening, Keenan Bengts replied that her role to provide recommendations only “is seen as being a weakness.”

“I don’t think it’s weakness,” she commented. “I think having only recommendation power gives me far more breadth to deal with issues as they come about.

“But some within government appear to consider that to mean when I make a request, it’s not really that important to answer it. So to the extent that this were to become a trend, I think that is a huge concern,” Keenan Bengts said.

“The office is an important one and demands a certain level of respect.”