Happy Valley standoff shooter to serve another 372 days in jail 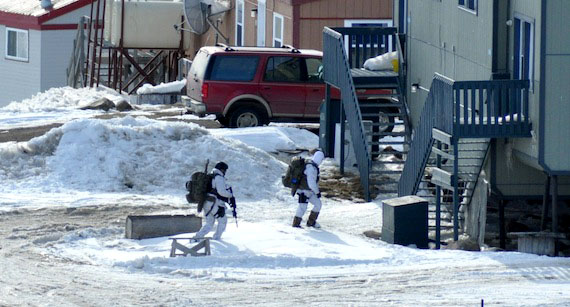 Armed police in white winter camouflage outfits search around houses in Iqaluit’s Happy Valley neighbourhood, which was locked down for 41 hours between April 28 and April 30, 2015. Jamie Mikijuk, now 28, will serve another 372 days in jail after pleading guilty to a firearms charge. (PHOTO BY THOMAS ROHNER)

It’s not the first time a Nunavut judge has used a sentencing decision to blast Nunavut leaders for the longstanding need to deal with widespread alcohol abuse in the territory.

And if Nunavut leaders continue on the current path, it won’t be the last time either, Justice Paul Bychok said in an oral decision delivered at the Nunavut Court of Justice Feb. 3.

Bychok sentenced Jamie Mikijuk, in custody since April 30, 2015, to another 372 days in a territorial prison.

Mikijuk, 28, caused a 41-hour standoff in April 2015 when, “drunk,” “distraught,” and “suicidal,” he armed and barricaded himself inside his family home in the Happy Valley neighbourhood.

For that, Mikijuk, who has no previous run-ins with police, must be sentenced to four years in prison, minus time served and other considerations, Bychok said.

“But this court cannot ignore what brought Mr. Mikijuk before it,” the judge said.

“On April 28, 2015, he was drunk, which is no excuse. But he was a distraught and suicidal alcoholic… This court cannot ignore that Mr. Mikijuk sought out help time and time again over the years. Mr. Mikijuk was an adolescent in distress. Mr. Mikijuk became an adult in distress…We must take meaningful action to help Nunavummiut in distress. The need is urgent. If we do not, this tragic scenario will play out again and again in the future,” the judge said in his 40-minute decision.

After the decision, the Mikijuk family hugged and cried.

Jamie Mikijuk, who greeted his family with raised eyebrows when he was led into the courtroom by a sheriff’s guard, wrote an apology that Bychok read into the court record Feb. 3.

“I am very sorry for the suffering I have caused to my family, my neighbours and my community. I’m very sorry to the RCMP for causing major disruptions… I’m also deeply sorry to anyone who felt afraid at that time because of what I did… I am ready to receive your judgment so that I can move forward to the next chapter of my life,” Mikijuk told the court.

Around 3:30 p.m. Iqaluit police received a phone call from Mikijuk’s girlfriend, who told police he was “drunk and suicidal” and believed to be armed, the court heard.

Mikijuk had access to four of his father’s rifles, which were not lawfully or properly locked and stored.

What followed turned into a 41-hour standoff that required 24-hour surveillance of Mikijuk’s Happy Valley home, carried out by the Nunavut RCMP and police from three other Canadian jurisdictions, Bychok said.

During that incident, which cost “tens of thousands of badly needed tax dollars,” Mikijuk fired 11 shots from a .17-calibre rifle, including four through his front living room window.

Police returned fire once with a sniper rifle, which missed Mikijuk, the judge said.

The incident ended without injuries when police fired tear gas into Mikijuk’s home around 9 a.m. April 30, 2015.

But Mikijuk negotiated with prosecutors and pleaded guilty to one charge of intentionally and recklessly discharging a firearm.

In coming to his sentence, the four-year minimum for that charge, Bychok took into consideration Mikijuk’s troubled past.

Mikijuk had been a “severe alcoholic” since the age of 14, binge drinking weekly to the point of blacking out, the court heard.

Once, Mikijuk’s drinking caused him to vomit blood, the judge said.

When he was 15, Mikijuk started selling weed to finance his drinking and smoking habits.

Alcohol abuse and suicidal ideation run in the Mikijuk family, as in many Inuit families, the court heard.

And alcohol abuse is a “crisis” in Nunavut, “tearing apart our society…tearing apart families,” while filling child protection dockets and jails, Bychok said.

But the crisis cannot be solved by the courts, Bychok said, echoing similar pleas from Nunavut judges in recent years. Instead, territorial leaders must commit to addressing widespread social problems like alcohol abuse.

From Mikijuk’s four-year sentence, Bychok subtracted time already served in custody (645 days at 1.5 credit for a total of 968 days) and credit for an early guilty plea and Mikijuk’s rehabilitation efforts since being arrested (credit for 121 days).

In addition to the 372 more days Bychok sentenced Mikijuk to serve, the judge also imposed a two-year probation period upon release, 60 hours of community service and a 10-year firearms ban.