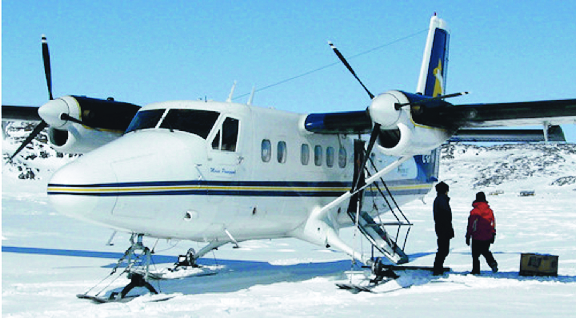 Nunavut Justice Paul Bychok said he will, “in a timely fashion,” rule on whether to issue a summary judgment, and avoid a trial, in a five-year-old legal grievance on behalf of Adlair Aviation against the Government of Nunavut over the awarding of a medevac contract in 2011. (FILE PHOTO)

A Nunavut judge is now considering a final judgment on a $31.5 million dollar lawsuit against the Government of Nunavut by Adlair Aviation Ltd. over a Kitikmeot medevac contract.

That action could end almost five years of litigation and sidestep the need for a trial.

Justice Paul Bychok said April 26 he’d release a decision “in a timely fashion” after hearing nearly two days of arguments from lawyers at the Nunavut Court of Justice, following a motion from the GN requesting summary judgment.

“This case is now five years out,” said the GN’s lawyer, Vincent DeRose.

“If the parties are not able at this stage to clearly articulate to the court the cause of action… it’s an obligation of this court to dismiss.”

Cambridge Bay-based Adlair held the lucrative medevac contract for the Kitikmeot region before their contract expired in 2011.

But Adlair alleges that a “secret deal” took place between the GN and winning-bidder Aqsaqniq Airways Ltd. when a new request-for-proposals was issued later that year. Adlair claims they were unfairly penalized for not properly filling out some paperwork.

The evidence for this, Adlair lawyer Ed Brogden admitted, is almost entirely circumstantial, but he argued against a summary judgment, saying that there’s enough in nearly 10,000 pages of submitted material to warrant a full trial.

“But what we do have is a number of coincidences… it just is too much to be pure coincidence.”

Bychok forced Brogden and his client to pay $10,000 in GN legal fees last September, after lengthy court sessions where Bychok said large parts of Adlair’s submitted affidavits amounted to hearsay and struck them from the record.

Central to Adlair’s allegations is what Brogden refers to as the “Keewatin Action.”

That’s a lawsuit against the GN by Air Tindi and Medic Northwest that Brogden alleges was suspiciously dropped at the same time the Kitikmeot medevac contract was awarded to Aqsaqniq.

Air Tindi is listed as an operator of Aqsaqniq, which itself did not have any offices, hangars and staff, or own any equipment, planes or valid Transport Canada Aviation licenses when it submitted four separate bids for the Kitikmeot medevac contract in 2011.

At the time, Air Tindi challenged the GN award of the Kivalliq medevac contract to Keewatin Air, but the matter was jointly dismissed in court within days of Air Tindi becoming the de facto provider of the Kitikmeot contract.

Brogden cited an email sent by the GN’s senior manger of procurement and logistics, Mark McCulloch, that he claimed hinted at collusion with Air Tindi, because McCulloch told recipients of the email to “refrain from further discussions until all options are considered.”

DeRose reminded Bychok that the issue before the court was whether in the original tendering process, Aqsaqniq’s winning-bid was handled correctly.

“What this court has to consider is whether the proposal as evaluated was or was not compliant, there is no evidence that it wasn’t compliant,” he said.

The GN has already admitted that under its tendering policy for the medevac contract, bidders were not required to have any physical assets.

But Adlair alleges that a Learjet proposed on Aqsaqniq’s winning bid was not legally or physically capable of servicing Kitikmeot hamlets with short, gravel runways.

“They offered an aircraft that doesn’t exist. You can’t do short takeoff and landing with a jet,” Brogden said, adding that a special kit to allow Learjets to land on short gravel runways does not exist.

Aqsaqniq told the GN about the gravel kit for its plane after being asked by the GN to clarify how it would use the Learjet in its proposal.

Brogden said the GN’s actions were unfair because while officials approached Aqsaqniq for additional information during the tendering process, they never told Adlair it had failed to provide certain documents—which dropped Adlair’s bid to fifth place out of six bids.

Those documents had to do with Inuit employment, in accordance with the GN’s Nunavummi Nangminiqaqtunik Ikajuuti, or NNI, policy that rewards businesses with higher levels of Inuit labour and ownership during the tendering process.

Adlair—which has operated out of Cambridge Bay since the 1950s—employs many local Inuit, but did not provide that information properly in its tender for the medevac contract.

Adlair attempted to resubmit that data after the RFP closed but the GN prevented them from doing so.

“Nobody is questioning if Adlair would have used Inuit labour, they just didn’t fill out the form to get the points,” DeRose said.

“The evaluation committee’s hands were tied.”

Brogden asked Bychok to look beyond the face-value of evidence and base his decision on the well-being of Nunavummiut.

Bychok did not provide lawyers with a date for his decision, but acknowledged the case’s long sojourn within Nunavut’s court system.

“I’m well aware that this case has been going on for many years, and I will do my best to return a decision in a timely fashion,” he said.